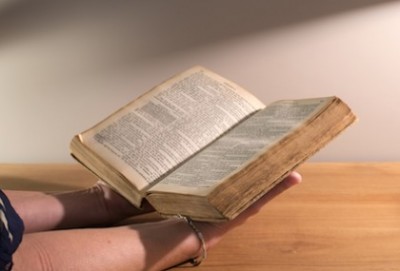 If you caught the news Thursday night, you probably heard that Lady Antebellum’s tour bus caught fire while traveling along Interstate 30 in Garland, Texas. According to reports, the country music crew was heading to the American Country Music Awards, where they are scheduled to perform, when the bus transporting the band blew a tire and went up in flames.

Many reports captured photos of the charred bus, the rear engulfed in flames with heavy black smoke rising high above the freeway, but what many didn’t report is this:

While the entire back lounge of the bus was destroyed, Scott’s Bible was the only item to survive the fire.

Scott posted a picture to Instagram and captioned it by saying:

“I kid you not, EVERYTHING in the back lounge was destroyed from the flames, except my Bible. The outside cover was burned and messed up but NOT ONE PAGE was missing. Yall [sic], God’s Word will always stand. He is FOR YOU, WILL PROTECT YOU, AND HIS LOVE FOR YOU WILL NEVER FADE. My faith is forever deepened because of today. I hope this story deepens yours.” (Read the full post below.)

Fans immediately took to social media to share the post and to comment on the miraculous story. Among the comments were other testimonies of similar events. One fan wrote, “My husband has a Bible just like this. It was wrapped as a present for him under a Christmas tree when the house caught fire. Cover is burned, but no damage to any pages inside.”

And still another, “Same thing happened to me when my car burned from one end to the other. The cover of the bible was destroyed bit [sic] the bible pages and the seat cover and foam under neath [sic] the bible was all that was left of the inside of that car.” The fan went on to say that as a result of the incident, her atheist neighbor across the hall found Christ.

The testimonies from fans went on and on. And while some of them were shocking to read, it shouldn’t surprise us. After all, the Bible says, “All people are like grass, and all their glory is like the flowers of the field; the grass withers and the flowers fall, but the word of the Lord endures forever” (Isaiah 40:6–8 , 1 Peter 1:24–25, emphasis mine).

While the entire order was likely traumatizing for those involved, Scott said it “deepened” her faith.

Does this testimony deepen yours?

is a freelance writer and contract copywriter who lives in the seacoast region of New Hampshire with her husband, Eric-Thomas,of five years. She currently serves alongside her mother as the Marketing Director for God’s Girls Christian Store and More, a online retail store serving the southern New England region. Her work has been featured in several print and online publications, and she is the recipient of two Faithwriters’ Editors Choice Awards for her short stories, which are scheduled for publication in the Mixed Blessings series. Her first book, Fragile: 30 Days of Hope for the Anxious Heart, is now available at samanthaarroyo.com. She can be reached at [email protected].
Previous Top 7 Reasons Weddings are Awesome!
Next Refilling Your Soul After Spiritual Warfare in a Marriage