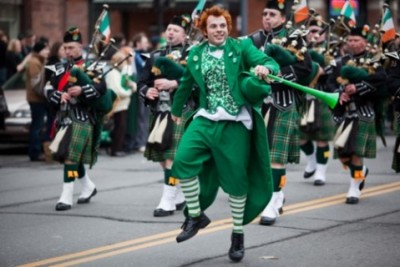 St. Patty’s Day: What Are We Celebrating?

Authentic Irish music, traditional dancing, leprechauns, parades, and a sea of green t-shirts, top hats, and shamrocks. It comes around just once a year, but on March 17, anyone who’s anybody dons their best green attire in tribute to St. Patrick’s Day. The festivities typically begin with a weekend parade followed by the clinking of foamy beer glasses that continue to spill over with Irish brews in the days leading up to the holiday.

In fact, St. Patrick’s Day is the fourth most popular drinking day on the calendar with partygoers consuming around 13 million pints of Guinness worldwide. And that’s just Guinness. Wallet Hub’s “By the Numbers” report highlighted some staggering facts[1]:

Sobering statistics. And all in the name of entertainment and celebration.

But how did St. Patrick’s Day—a day rooted in Christianity—turn into one of the biggest drunk fests of the year? For a quick snapshot of the holiday’s origins, take a look at this video:

Back in the day, St. Patrick’s Day was deemed a sober day. The pubs were closed. No boozing or sloppy drunks stumbling between pubs.

As you saw from the video, St. Patrick wasn’t even born in Ireland. Rather, he was held as a prisoner in Ireland for six years. Having nothing to cling to, he turned to his faith and several years after his escape, returned to the country to witness to the Celtic pagans.[2] He’s even been credited with converting the country to Christianity, but he arrived in Ireland with a dual mission: minister to the Christians and witness to those who weren’t. He was a missionary, rumored to have used the three-leaf clover as a means of explaining the Holy Trinity, and earned his title as country’s national apostle.

Saint Patrick even described himself as a “most humble-minded man, pouring forth a continuous paean of thanks to his Maker for having chosen him as the instrument whereby multitudes who had worshipped idols and unclean things had become the people of God.”[3]

As Fox News‘ Dr. Manny Alvarez points out, “He [St. Patrick] lived by example. This St. Patrick’s Day, more than ever, it’s clear to me that we should all be looking at how we are conducting our lives.”[4]

Rather than binging on booze, wouldn’t it be better to reflect on the example St. Patrick set?

Hebrews 13:7 says, “Remember your leaders, who spoke the word of God to you. Consider the outcome of their way of life and imitate their faith.” While not speaking specifically to people in the past, it can certainly be applied. St. Patrick spoke the Word of God. He, as Alvarez said, led by example.

St. Patrick’s Day is full of tradition, folklore and entertainment—how will you celebrate tonight?

is a freelance writer and contract copywriter who lives in the seacoast region of New Hampshire with her husband, Eric-Thomas,of five years. She currently serves alongside her mother as the Marketing Director for God’s Girls Christian Store and More, a online retail store serving the southern New England region. Her work has been featured in several print and online publications, and she is the recipient of two Faithwriters’ Editors Choice Awards for her short stories, which are scheduled for publication in the Mixed Blessings series. Her first book, Fragile: 30 Days of Hope for the Anxious Heart, is now available at samanthaarroyo.com. She can be reached at [email protected].
Previous Osteoarthritis, Ezekiel, and Dried Up Bones
Next God Will Take Care Of You