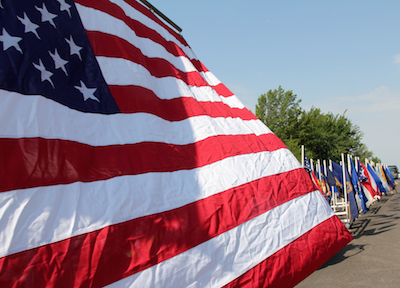 The Excitement of a Memorial Day Parade

Memorial Day parades are awesome. Watching the parades from the sidelines instead of on television is nice, but nothing beats actually marching in it. Yesterday, I got a chance to do both.

I didn’t plan on being in the parade, but I ended up marching down the street anyway. I was on the sidewalk taking pictures and waving, until my church group, the Pathfinders club, passed by—drums booming. Then I started experiencing the parade from a different perspective.

Not only do we all get to recognize and celebrate the brave heroes of this country on Memorial Day, but we get to enjoy every minute of it as well.

The Colors
Red, white, and blue. When combined, they represent the National Flag of the United States of America. On a day like today, flags of all different sizes are seen in the hands of both the young and old. They’re also on cars, chairs, hats—even shirts and necklaces. Patriots proudly don spiffy outfits in a variety of red, white and blue combinations. These three vibrant colors form the backdrop of the entire day. How exciting that our God took the time out to create something as magical as colors. (Colossians 1:16)

The Spectators
Parades transform the sidewalks into stadium seats. What use to be a place for walking, is covered with lawn chairs. Everyone wants front-row seats on the side of the road so they have a clear view of the procession. All around eyes are glued to smart phones as users snap pictures and make videos, the atmosphere, thick with sporadic applause and cheer.

Today, scattered among the spectators, were Christian men, women, and children handing out tracks. Some even had huge signs with Scriptures on them. It reminded me, even in the midst of celebration, there’s still an opportunity to witness. (Acts 1:8)

The Participants
A mixture of veterans, cadets, boy and girl scouts, and various organizations all marched to their own beat in the parade. Some group wore stern looks on their faces while others brandished smiles. Undoubtedly, they must have felt important and honored since they were the center of attention. Even horses and dogs took part as well. But the best part of the day, was watching our church van spread the Gospel of Christ through the message written on its sides. (Mark 16:15)

What is your favorite part of the Memorial Day parade? What does this day mean to you?

Amelia Brown is from the beautiful island of Jamaica. She is a 28 year old Guidance Counselor by profession, but a passionate writer at heart. Most of her articles written are aimed at stimulating positive change under the guidance of the Holy Spirit. She is also a published poet and a member of Faithwriters. Outside of writing, she enjoys volunteering, cooking, and turning frowns right side up. Amelia currently lives in New York.
@ameliambrown
Previous Power to Set Captives Free
Next Being a Brine of Kindness to a Sour Pickle