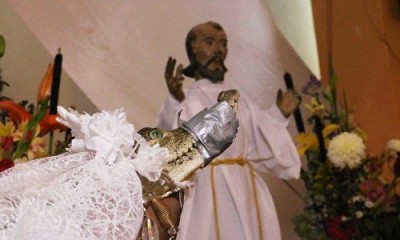 4 Headlines That Will Bring Tears To Your Eyes

Friends, some of my least favorite things to write about are political issues, but over the past week, things have rapidly changed in the United States, and it’s looking like they’re only going to get worse if we don’t refocus on what is happening and take a stand. At this time, I would like to look at four headlines and the impact they are having on our country.

On Tuesday, Mexican Mayor Joel Vazquez Rojas, “married” Marie Isabel. Congratulations to the happy couple, right? Wrong! You see, Marie Isabel is a an alligator who is thought to be a princess, and this was his motivation for marrying the reptile. Supposedly, the couple exchanged vows, despite Marie Isabel’s mouth being duct taped shut. She was even dressed in a bridal gown. The people of San Pedro Huamelula believe that all this is good luck and will improve their fishing.

This isn’t the first time man (or woman) has married an animal. In fact, it has happened numerous times in the recent past. In 2014, Amanda Rodgers of Great Britain married her dog “Sheba” in Croatia and Mangli Munda of India married a stray dog named Sheru to try to ward off a family curse. Earlier animal marriages include a cow, a dolphin, a snake, a goat, a horse, and some cats.

Prov 12:10 A righteous man regardeth the life of his beast: but the tender mercies of the wicked are cruel.

Linda Barnette, a Circuit Court Clerk of Mississippi for 24 years, resigned her position rather than issue marriage licenses to gay couples. Let’s look at what she had to say:

The Supreme Court’s decision violates my core values as a Christian. My final authority is the Bible. I cannot in all good conscience issue marriage licenses to same-sex couples under my name because the Bible clearly teaches that homosexuality is contrary to God’s plan and purpose for marriage and family…I choose to obey God rather than man.

It is a sad day in America when a dedicated Christian woman is put into a position to resign her job of 24 years in order to honor her faith in God and His purpose for mankind.

It’s really happening folks, the gay community is trying to purge faith from our military and their efforts have stepped up since the Supreme Court’s decision to try to force us to accept gay marriage. Our Chaplains, which happen to be U.S. Soldiers, Sailors, Airmen, and Marines, are being told “their service isn’t welcome”, and that they need to “get out.”

So who is leading the attack. It may surprise you. Mikey Weinstein of the Military Religious Freedom Foundation. Say what? A foundation for religious freedom is attacking the religious freedom of Chaplains in the military. The website tagline even has the following quote from Weinstein:

I am a United States Army Veteran and I take offense to his demeaning remarks against my military brothers and sisters who willingly put their lives on the line for our country to protect it against all enemies foreign and domestic.

Weinstein, who is a self pro-claimed atheist, has also said the following about our military brothers and sisters by accusing them of being…

And recently went on to proclaim:

The only honorable thing that these losers can do is to fold up their uniforms, turn in their papers, and get the hell out of the American military chaplaincy.

Folks, it’s happening! Atheist groups are trying to use “gay marriage” to establish a state religion of atheism. You have been warned.

Please listen to Lieutenant General Jerry Boykin’s discussion on the ramifications of supporting Weinstein’s movement against our military.

The Ten Commandments Under Attack in Oklahoma

In some more disturbing news, Oklahoma’s Supreme Court ruled that the statue of the Ten Commandments on the capitol grounds of Oklahoma is to be removed. Immediately following the decision, Oklahoma Attorney General, declared that they “got it wrong.” and has issued a petition that will delay any removal of the statue. In addition, Republican legislators are fighting back and calling for the impeachment of the justices who called for the removal of the Ten Commandments. Furthermore, they accused the justices of “judicial bullying” and declared that “it’s time the people choose jurists.”

In response to this, Satanic Temple spokesmen, Lucien Greaves expressed that they would no longer press the Oklahoma Supreme Court to place their Satan statue on capitol grounds, but would be pursuing the placing the statue and copies of it around the United States to counterbalance the Ten Commandments. The statue features Satan in the form of Baphomet, the sabbatical goat, with two “adoring children” at his side. Greaves also expressed that the statue has also been designed as a seat so ” people of all ages may sit on the lap of Satan for inspiration and contemplation.” One place they are planning to target is the Arkansas Capitol, and they have already made plans to unveil their statue in Detroit on July 25, 2015.

Friends, it’s happening and it’s happening quickly. Opponents of Christianity are working quickly to purge our rights, and even us, from the United States of America. The very land that was established on Judeo-Christian beliefs, and who did their best to form a U.S. Constitution that would protect us from such tyranny. There is a time to act, and that time is NOW! Thank you for reading and God bless.

How can you contribute to stopping the tyranny happening in Our United States of America?

If you would like more information on how to take back control of the U.S. Constitution, please click on the banner below.

Joel M. Bauer is a 45-year-old U.S. Army Veteran from Dunn, NC, which is just outside of Raleigh. After being honorably discharged from the U.S. Army, he attended school at Taylor University, a Christian liberal arts school, in Fort Wayne, IN, where he received his BS in social work and psychology. He has worked in such places as a homeless shelter, a community based treatment center for severe mental illnesses, a school for troubled students, and other social service agencies. His current endeavor is to build The Bottom Line website into a site that inspires both Christians and non-Christians alike, and brings glory to God.
Previous Our Hope: What Would Jesus Do?
Next What Will Your Legacy Be?