Breaking News
Home / Faith / Archaeologists Uncover the Site of Jesus’ Trial — or Did They? 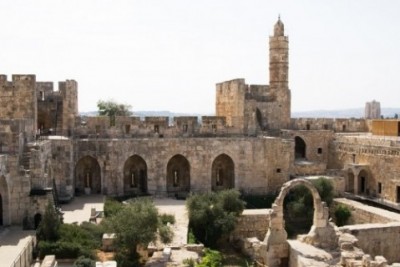 Archaeologists Uncover the Site of Jesus’ Trial — or Did They?

The site where Jesus was tried before Pontius Pilot, just prior to His brutal execution, is now open to the public.

This enormous piece of history, buried beneath an abandoned prison near the Tower of David Museum grounds, was first discovered by archaeologists in 1999. According to the Washington Post, what are thought to be the foundations of the palace of King Herod were uncovered while excavating the floor of the prison during a separate planned expansion project. But as fate would have it, the ruins were sealed off just one year after the discovery, largely due to a lack of funding. Despite ongoing financial woes and recurring war that caused significant delays, the ruins are now open four tourists to explore.

Amit Re’em, the Jerusalem district archeologist with Israel Antiquities, told the Huffington Post that the palace “… was enormous, with a lot of gold and silver and running water and guest quarters.” The ruin were found in the area described by the ancient Jewish theologian, Josephus, and also contains a complex sewage system.[1]

Despite unearthing these remarkable ruins, archaeologists, theologians, and scholars alike continue to question where Jesus was actually tried. This is largely due to various interpretations of the Gospels. According to the same report by the Washington Post, the gospels “describe how Jesus of Nazareth was brought before Pilate in the ‘praetorium,’ a Latin term for a general’s tent within a Roman encampment. Some say Pilate’s praetorium would have been in the military barracks, others say the Roman general would probably have been a guest in the palace built by Herod.”[2]

So, are these the walls that witnessed one of the most famous scenes in Christian history? Is this the place where the Jews demanded Jesus be crucified?

Shimon Gibson, archeology professor at the University of North Carolina in Charlotte, told the Washington Post that he is certain it is. “There is, of course, no inscription stating it happened here,” he said, “but everything—archaeological, historical, and Gospel accounts—all falls into place and makes sense.”[3] He is likely referring to the accounts in John, where scripture describes the trial taking place near a gate on a bumpy stone pavement—“details that fit with previous archaeological findings near the prison,” the Washington Post noted in the article.

“Then the Jews led Jesus from Caiaphas to the palace of the Roman governor.” John 18:28 NIV

“When Pilate heard this, he brought Jesus out and sat down on the judge’s seat at the place known as the Stone Pavement.” John 19:13 NIV

While this discovery (although not recent, just recently made public) may make the location less debatable, there is still one question remaining: Will the path of the Via Dolorosa (or, The Way of Suffering) change? As many may recall, the Via Dolorosa follows the path that Jesus took as He carried His cross to the site of His crucifixion. Up until this time, the trial was understood to have taken place at the Antonia Fortress, a military barracks. It marks the first of the 14 Stations of the Cross.

Keep in mind that the Via Dolorosa has changed several times and has been long debated—and as The Daily Beast noted, “the news of the discovery publicizes the fact that historical accuracy of the pilgrimage route was always on shaky ground.”[4]

In his interview with the Washington Post, Re’em noted that “from early Christianity until Crusader times, the Via Dolorosa” – the route Jesus took on the way to his crucifixion – “passed by Herod’s palace. Only since medieval times did the route change.”

Rev. David Pileggi, minister of Christ Church near the museum, also spoke with the Washington Post, stating that he doesn’t think the Via Dolorosa route will change “anytime soon.”

“What makes a place holy is the fact that people have gone there for hundreds of years, prayed, cried and even celebrated there,” he said, “so I don’t think there will be changes to the route anytime soon. But the prison does give us a clearer explanation of Jerusalem’s history.”

What are your thoughts? Given the significance of this finding, should the Via Dolorosa be rerouted… again? Does it demand more concrete historical evidence before such measures are taken? Or do you agree with Pileggi’s definition of what makes a place holy?

is a freelance writer and contract copywriter who lives in the seacoast region of New Hampshire with her husband, Eric-Thomas,of five years. She currently serves alongside her mother as the Marketing Director for God’s Girls Christian Store and More, a online retail store serving the southern New England region. Her work has been featured in several print and online publications, and she is the recipient of two Faithwriters’ Editors Choice Awards for her short stories, which are scheduled for publication in the Mixed Blessings series. Her first book, Fragile: 30 Days of Hope for the Anxious Heart, is now available at samanthaarroyo.com. She can be reached at [email protected].
Previous When You Feel Like God Doesn’t Understand
Next Teach Us To Ponder