Breaking News
Home / Faith / Are You Living In A World Of Hope? 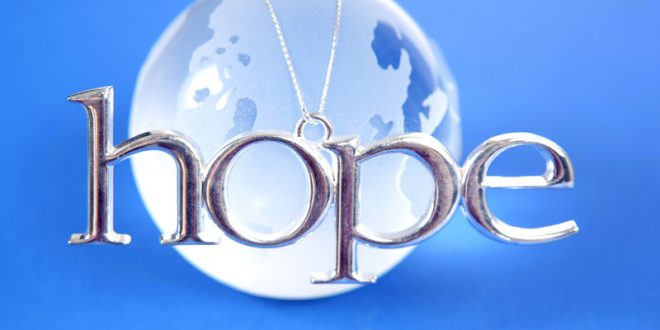 Are You Living In A World Of Hope?

If you are like me, the world conditions are on your mind a lot. People are living without hope and peace. The world’s problems are not getting any better; they are only getting worse. Added to this is that many people don’t have any assurance of experiencing a better world. Recently a comment was made on an interactive forum on the topic of world peace. This person said,  “we have manufactured so many barriers as a society that finding a way to deconstruct those barriers has proven untenable this far.”  Not only are many living without hope and peace, they have no assurance of an afterlife that will be any better. Some believe in no afterlife at all, so when their time is up, that’s it.

Christians know the reason behind the present world conditions. We know the reason for the state of the human heart. A life and culture without God is naturally inclined by a sin nature to think and act in wrongful ways. God has told us in his Holy Word that prior to his second coming things would get increasingly worse. There would be evil continually, evil would called good, and good would be called evil, and things would get so bad that people will live in fear.

As we approach the end of the Church Age, or as it is also called, the Age of Grace, Christians have a hope and assurance of something a whole lot better than what this present world is experiencing. Whatever one’s views are on the Tribulation and rapture, in the long run, we have something to look forward to. Much is said about the Tribulation Period, but very little is said about what happens after that time. The Book of Revelation talks about a 1,000 year reign of Jesus Christ upon the earth. Won’t that be something! That means if the Tribulation began tomorrow, seven years later Christ will rule this world.

Believers who have accepted Jesus Christ as our Lord and only savior, have even more to look forward to than a world in which God is given his rightful place as King. We have the assurance of eternal life in His presence. This is not based on a human philosophy, or worse yet, someone’s opinion, but on the inspired word of scripture. If you don’t believe that scripture is inspired by God then you are failing to see the significance of what is happening in our world today. Dozens of prophecies written thousands of years ago are converging literally and exactly in the way they were prophesied.

As our godless culture is crying out for hope and peace, it is denying the very thing that will provide the answer. The last few days I have personally been struck by the power and comfort of the words spoken in I Peter 1: 3-9:

“Blessed be the God and Father of our Lord Jesus Christ, who according to His great mercy has caused us to be born again to a living hope through the resurrection of Jesus Christ from the dead, to obtain an inheritance which is imperishable and undefiled and will not fade away, reserved in heaven for you, who are protected by the power of God through faith for a salvation ready to be revealed in the last time. In this you greatly rejoice, even though now for a little while, if necessary, you have been distressed by various trials, that the proof of your faith, being more precious than gold which is perishable, even though tested by fire, may be found to result in praise and glory and honor at the revelation of Jesus Christ, and though you have not seen Him, you love Him, and though you do not see Him now, but believe in Him, you greatly rejoice with joy inexpressible and full of glory, obtaining as the outcome of your faith the salvation of your souls” (emphasis mine).

With all that is happening in the world, Christians can have a “living hope” in this world and the next. And with all the literal fulfillment of prophecy it means we are that much closer to experiencing our “inheritance which is imperishable and undefiled and will not fade away, reserved in heaven.”

Are you in need of hope, or are you experiencing the living hope found only in Christ?

John Livingston Clark is 67 years of age and lives in central Washington State. He has written two published books, and two published poems. His initial book is called, " God's Healing Hope: Breaking the Strongholds of Wrong Thinking." His second book, released in December of 2016, is a motivational book written to seniors titled, " Seniors: Are You Retiring or Recharging?" Both books are available on amazon. You can also view his writings on www.faithwriters.com. John is available to speak on a variety of topics. Visit me at jclarkministries.com
Previous What A Beautiful Name
Next Feeling Like A Leaf In the Winds of Sin?