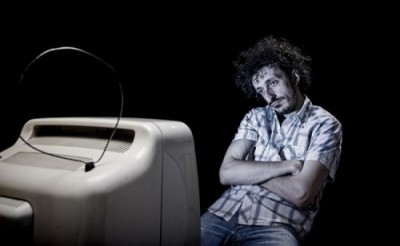 As Seen On TV

We don’t have satellite TV at our house, but we do have “farmer’s cable” meaning our channels are limited to a small selection including infomercials. Between the Snackeez, Pillow Pets, and everything else in between, my kids love to try and convince me of how desperately I need, or should I say, they long to have, these half practical and half ridiculous items.   After a few reminders of why not to always buy things on TV, they seem to let the issue go until of course, the next big desire comes along.

I am not much of a TV watcher myself but as a parent, I make sure to keep a keen eye on what is available for my kids to view both the good and the bad. Lately my observations have been focused in on the media’s forced perspective of both teenage boys and men. I was a little distraught at the amount of shows that represent men in such a negative light.

Words such as weak, inferior, stupid, idiotic, and dumb all describe the kind of man that is becoming a repeated character in several television shows. In addition to being shown as inferior, most of the men were made to appear clueless, some type of sex or sports maniac, or they were shown as incapable to think for themselves.

Since when did society decimate a man’s character in such a way that leaves them trying to figure out just what a man should look like?

Our Western culture has gone to both of the polar extremes (“Don’t cry, be a man” vs “Oh, you look so handsome in pink.”) in order to define the characteristics of being a man.

Why are we allowing men to figure out who they are based upon what the media declares and what society implies? Instead of taking man’s word we need to be digging into God’s word, the one who created man in the first place.

As a mom of two boys, I want to be sure that the perspective my boys have of themselves is modeled after the One who created them and not something “As seen on TV”.

Imagine what our young men, husbands, and fathers would be like if they lived life like Joshua, David, Peter, Paul, or any other true man of God. I am guessing that there would be a lot less violence, fatherless kids, and fewer grown men living at home with their parents.

is an author and editor for The Bottom Line Ministries as well as a member of Faith Writers. Currently she teaches high school language arts. She is a mom to four amazing blessings and enjoys every moment life has to offer. Renee has a fervor and drive to learn, she loves to read and spend time with her family, and is involved with her local church ministries. Humbled by God’s gift of words, she has a passion to write what the Holy Spirit has placed in her heart. She hopes to publish her in-progress book someday, but in the meantime, is honored to be placed as part of the TBL writing family and is holding on to the ride wherever God is leading. Renee and her family reside in their country home in Holland, Iowa.
Previous The Underside Of Writing
Next National Guard Academy for Dropouts a Huge Success