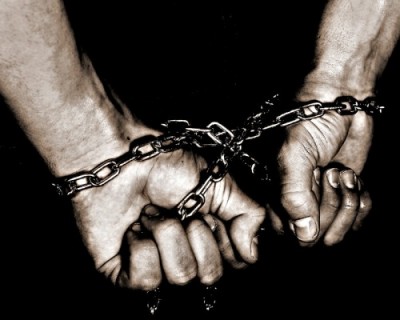 Binding the Thief and Taking Authority

“So Jesus. Where are we headed next?” His disciples casually asked.

“Across the lake to the region of the Gerasenes.”

“Lord, are you sure about that? I heard there is a demon possessed man, and he gets chained by his hands and feet a lot and even at times he breaks through the chains. They were made of iron, Lord! Not only that, but all he does night and day is cry out among the tombs and in the hills. He also cuts himself with stones. I think he’s a little messed up, so why exactly are we going there?

“Because he needs me to take authority over his demons.”

After getting out of the boat, Jesus and his disciples proceeded to approach the man.

When he saw Jesus from a distance, he ran and fell on his knees in front of him.  He shouted at the top of his voice, “What do you want with me, Jesus, Son of the Most High God? In God’s name don’t torture me!”  For Jesus had said to him, “Come out of this man, you impure spirit!”

Then Jesus asked him, “What is your name?”

“My name is Legion,” he replied, “for we are many.”  And he begged Jesus again and again not to send them out of the area.”

Jesus noticed a large herd of pigs nearby which the demons saw as well.

The demons begged Jesus, “Send us among the pigs; allow us to go into them.” And so he did. The impure spirits came and went into the pigs. Then, the heard, roughly two thousand, rushed down the steep bank into the lake and were drowned.

The people who took care of the swine spread the news like wildfire, or viral if it was online. When they came to Jesus, they saw the man who had been possessed by the legion of demons, sitting there, dressed and in his right mind; and they were afraid. (Mark 5:1-20)

For many years this man had suffered greatly from demons that were just like a thief stealing his life. Yet, Jesus took authority over the situation. He bound the demons and cast them amongst the swine-what was considered, by Jews, to be the filthiest animal around. Jesus then restored the man’s life and bound what needed to be bound. He claimed righteousness over the man ultimately restoring back his life.

When Jesus Christ lives inside of you, you too have the authority and power of Christ to bind impure spirits and cast them amongst the swine.

May you come to know the power, love, and freedom that Christ brings from the bondage of the wily thief.

is an author and editor for The Bottom Line Ministries as well as a member of Faith Writers. Currently she teaches high school language arts. She is a mom to four amazing blessings and enjoys every moment life has to offer. Renee has a fervor and drive to learn, she loves to read and spend time with her family, and is involved with her local church ministries. Humbled by God’s gift of words, she has a passion to write what the Holy Spirit has placed in her heart. She hopes to publish her in-progress book someday, but in the meantime, is honored to be placed as part of the TBL writing family and is holding on to the ride wherever God is leading. Renee and her family reside in their country home in Holland, Iowa.
Previous The Heart Remembers
Next Jungle Evangelism