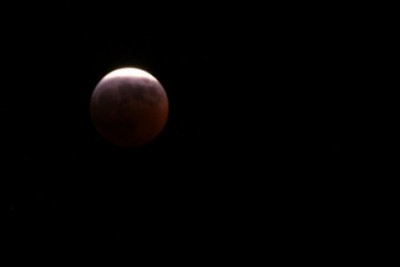 Blood Moons – God Is On The Move

Have you ever taken the time to watch a solar eclipse?  It isn’t an activity for the sleepy or those easily bored.  It can be rather like watching paint dry.  In today’s fast-paced world, we hardly have the time for it.  But, since I knew it was a blood moon, I took the time to watch the middle part of the total lunar eclipse.  I spent the time watching, praying, and telling God how good He is at what He does.

This special eclipse took place around 4:00 a.m.,  Wednesday, October 8, 2014.  It was the second in a series of four total lunar eclipses, called a tetrad, and will have some partial solar eclipses sandwiched between these lunar eclipses. (Genesis 1:14)  Now if that isn’t unique enough for you, each eclipse date also hosts a Jewish feast day.   In the past, these extremely rare arrangements of the feast days and the total lunar eclipses, this being the third time, have had life-changing significance for the Jewish people.

What impressed me the most as I watched this virtually motionless, God-ordained, heavenly event, was the silent way in which it occurred.  A majority of people around the world slept though the God-scheduled event.  The full moon hung in the sky as it does every month, the shadow of the earth darkened it to a blood-red shade, then the shadow moved silently away to once again reveal the brilliant full moon as though nothing had happened.  But, time will tell!

It seems to me that many of God’s moves happen silently and without fanfare.  When He does add some fanfare, we often find a feasible or user-friendly explanation.  God was on the move when it started to rain on Noah and when Abram left Ur to journey to parts unknown.  He was moving when Moses killed the Egyptian. He was on the move when David, the shepherd, was born and Mother Teresa, too.  He was still on the move when you and I were born! (Jeremiah 29:10-12)  But, to many, those days were life as usual.

Since God is a creator, He is always on the move, always creating and His creation has a purpose (Revelation 4:11).  Any lack of awareness on our part does not negate His move.  Attributing His moves to coincidence, as we often do, must cause Him grief, but it doesn’t halt Him in His tracks.

God-moves in our life and times are often very subtle. Quiet, yet always effective and on time even thought we might not notice or realize it.  When we make the effort to purposefully attend to Him, we will see that He is still on the move concerning the things that have to do with us.  I challenge you: stay watchful and don’t attribute anything to coincidence.  Believe that God loves you and is working His plan, even though silently and invisibly, in your life.  He is faithful and He is able. (Romans 11:36)  Let your faith soar. (Hebrews 11:6)

I just love walking outdoors - day or night. I identify most with the creative side of God and am energized by His artistry all around this world. He amazes me every time I turn around! Yeah, God and thank you, Jesus.
Previous Power and Purpose!
Next A Tale of Three Dogs