Breaking News
Home / Faith / Christianity: Is it Religion or a Relationship? 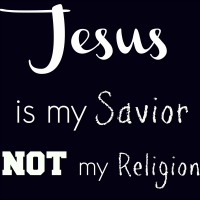 Christianity: Is it Religion or a Relationship?

We’ve all heard the quote about Christianity, “It’s not a religion, it’s a relationship.” While it would be ideal if we could say in a simple sentence that Christianity is black and white, it is actually a bit more. Unfortunately, over time people have viewed Christianity through a lens of legalism. In turn, it makes people look at religion with an immediate distaste. But Jesus gave us more than just a list of do’s and don’ts. He gave us life and amazing grace.

Christianity is both a religion and a relationship. But why do we see so many Christians quoting this statement as if it came from the Bible itself? As the Bible is seen as increasingly more offensive, it is easy to see how people think that religious zealots reflect what Christianity is about.

Why it’s a religion:

A religion is defined by Merriam-Webster to be (1) the service and worship of God or the supernatural;
(2) commitment or devotion to religious faith or observance, and a personal set or institutionalized system of religious attitudes, beliefs, and practices.

Why it’s a relationship:

Following Jesus is about a relationship! But there is a reason we had the Old Testament Law, which often causes people to see Christianity as just another religion. But then Jesus was born and He changed everything. Jesus became a man so that He could show us how to love our Father in heaven and how much we must depend on Him. It wasn’t just about seeing a perfect man or a good teacher follow all the rules. It was about seeing how close of a relationship Jesus had with God. And it still is about the relationship we have with God.

“But whoever is united with the Lord is one with him in spirit.” 1 Corinthians 6:17

And why it’s both:

Being a Christian is about knowing Jesus Christ as Lord and Savior. It’s not just a religion nor is it just a relationship. First we had The Law, and it became apparent we could not keep those rules. We have a relationship with Jesus because of the extreme love bestowed upon us by our heavenly Father. It took Jesus living here for us to understand that crazy love. Some people may argue that Christianity is not a religion because religion is from man and not God. While man created the paganism that runs rampant in our world, it’s important to realize that to the lost, Christianity is a religion because it’s a belief and a way of life we choose to live.

God gives us rules and although we were saved through faith, the Lord also has set rules for us to follow. It all comes down to commitment, but commitment is about love. If you love the Lord you will be committed to Him.

Do you think Christianity is a religion, a relationship, or both?

Sarah loves Jesus and is unashamed to tell the world about His truth and bold love! Her purpose is to encourage others to seek the truth as they pursue who they are in Christ. She is also a Mom and feels blessed to call Colorado her home.
Previous I Need A Rooster In My Life
Next Exposing the Spirit of Infirmity