Breaking News
Home / Faith / Do You Suffer From Discontentment? 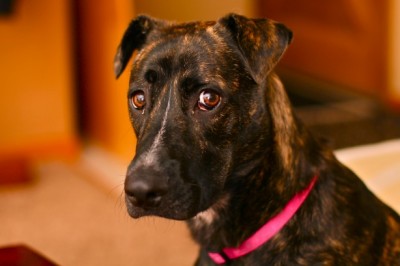 Do You Suffer From Discontentment?

Sunday evening, we came home from church to find our pantry had been ransacked. Spices lay in the floor. Boxes and pouches lay askew on their assigned shelves. Cans lay on their sides, overturned at some point during the process. And from the way Mitch, our shepherd mix, turned and ran the other way, I had a pretty good idea who the culprit was.

The thing I have yet to figure out is why. Unlike most Sundays, Jason and I had been able to come home for the afternoon. That being the case, I was able to feed the dogs right before we left for evening service. So Mitch wasn’t hungry. We had taken him for a nice hike on both Thursday and Saturday, so he wasn’t overwhelmed with excess energy.

He has never gotten into the pantry before. Never! He’s taken a few things off the counter or nightstand when we’ve been foolish (or forgetful) enough to leave them out. In fact, he once ate an entire pan of banana nut muffins when I left them easily within his reach. But he’s never taken anything from the pantry. So, I can’t figure out what possessed him to scrounge around in the pantry, settling for the hamburger buns on the third shelf up (nearly six feet off the ground). He bypassed the Poptarts, the crackers, the open bag of chocolate chips that sat innocently on the bottom shelf. Instead, he went for the buns. How do I know? Because I found the wrapper out in the backyard, along with a tattered bag of instant mashed potatoes. Yum!

The only thing I can figure is that Mitch, like myself, had a battle with discontentment and lost. He wasn’t hungry. His needs had been met. But he still wanted more. He simply was not satisfied with what he had. After I got done lecturing Mitch, I had to lecture myself because I act the same way sometimes. God has met all my needs. I’ve never been truly hungry. I’ve never been without a roof over my head. I’ve always had clothes and shoes to wear. In addition to that, I have luxuries that most of the world can only dream of–a television, a radio, computers, a vehicle, a cell phone, and so on. Yet at times, I still find myself wallowing in self-pity for all the things I don’t have. I find myself wanting more. My, my, my! How ungrateful I can be!

Benjamin Franklin put it this way:

Well said. We are rich in so many things, but without contentment, we might as well not have them. Be wary. Discontentment is one of Satan’s favorite tools. It can rob us of our gratitude and shift our focus. It can burden us with discouragement and convince us that God has not been good to us. It can plant a seed of bitterness that flourishes with every area in which we feel we’ve been treated unjustly. It is a powerful tool that often slips in unnoticed until it has overtaken the mind.

Let’s stop ransacking the pantry of life and start being satisfied with the many things God has given us. We have been so blessed. It’s about time we started acting like it.

Not that I speak in respect of want: for I have learned, in whatsoever state I am, therewith to be content. – Philippians 4:11

What areas in your life cause you the most discontentment?  What can you do to regain an attitude of gratitude for the many blessings you do have?

*****This article is an excerpt from ‘Paws’itively Divine:  Devotions for Dog Lovers.*****

Dana is a full-time Christian author and speaker residing in Greenville, SC with her husband and two dogs. In fulfilling her call to evangelize the lost and edify the saints, Dana spends her days writing devotions, devotional books and books for children, as well as recording podcasts on various Biblical topics. She serves in many capacities at her local church, including the roles of church pianist and ladies' Sunday School teacher. Dana has a passion for souls and longs to be used of God in whatever way He deems necessary. When not writing or serving at church, Dana can most likely be found reading or hiking a nearby trail.
Previous Turning Your Complaining Into Thankfulness
Next And Your Desire Shall be for Your Husband