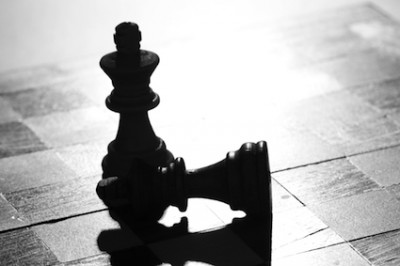 Don’t be Passive in Spiritual Warfare!

We were born into a war. Whether we realize it or not, there is a spiritual battle raging all around us. The Bible is clear that our battle is not a physical one, but a spiritual one. Our enemy is the devil and his kingdom of darkness. (Ephesians 6:10-18).

In this spiritual war, we cannot afford to be passive. A passive attitude simply lets things happen without putting up resistance. This is not the attitude that Jesus walked in. He came to destroy the works of the devil, and He was active in fulfilling this mission. He didn’t have a fatalistic mentality that whatever was happening must have been God’s will. Instead He came to establish the kingdom of God on earth as it is in heaven.

Peter gives us some good instruction for the battle we are in:

“Be sober, be vigilant; because your adversary the devil walks about like a roaring lion, seeking whom he may devour. Resist him, steadfast in the faith, knowing that the same sufferings are experienced by your brotherhood in the world.” 1 Peter 5:8-9

This passage calls us out of passivity and into an active fight. We are told to be serious-minded and vigilant because we have a real enemy who is always on the hunt. The devil is restless in his attempts to attack and enslave, and we cannot afford to ignore this.

We are called to resist the devil with a steadfast faith. The word for resist in the original Greek means to set yourself against, to actively resist and oppose. We must submit to God and not allow any agreement with the enemy. This puts us in a position to effectively stand against his attacks.

As we take this stand, it is important to realize that we are fighting from a position of victory. Jesus has already defeated the devil and his kingdom of darkness. His death and resurrection ensured Satan’s defeat and our victory over him. When we stand against the enemy, we are enforcing what Jesus has already accomplished.

In my next article, I will cover some of the weapons that we have in our battle. I pray that we will take to heart the words of Peter to be active in our stand against the enemy and break free from a passive spirit that would keep us ineffective in the battle we face!

Do you tend to be passive or active in the spiritual battle we are in? Can you think of times when you effectively resisted the devil?

Jake Kail is a teacher, author, and speaker who is passionate for the kingdom of God. He was called into ministry during his college years, after a life-changing encounter with God. The focus of his ministry is on teaching and equipping believers, strengthening local churches, and seeing awakening and restoration come to the church. He also ministers often in the area of deliverance from evil spirits, seeing people set free from bondage, torment, and oppression. Jake is the author of three books: Restoring the Ministry of Jesus, Can a Christian Have a Demon?, and Abiding in the Vine. He speaks at churches, retreats, conferences, and other venues. Jake lives with his wife and family in Lancaster, PA where he serves on the pastoral team at Threshold Church. Check out Jake’s website and blog here: http://www.jakekail.com.
Previous Have You Received God’s Free Gift?
Next Be Careful What You Watch—It Could Haunt Your Dreams