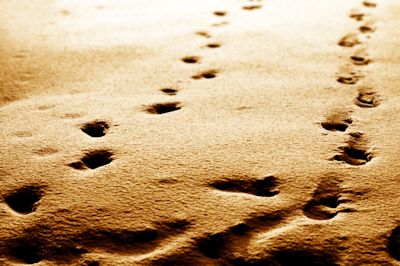 A carpenter was busy building a Hollywood set when a producer walked by and asked him to help read parts for actors auditioning for roles in a new movie. The carpenter dropped his tools and followed the producer. A little later, the producer said  to the carpenter, “I know who I want. It’s you.” The producer was George Lucas. The carpenter was Harrison Ford, who went on to star as Han Solo in “Star Wars.” You never know where it might lead when you drop what you are doing or leave a certain type of life to follow someone. It, of course, depends upon who is leading you.

Jesus called people to come out of their way of life and follow him. In Matthew 4:19 he said to two fishermen, “Follow me, and I will make you fishers of men.” In the next verse it says that they immediately left their nets and followed him. Following Christ  may come with a price. Matthew 16:24 states, “If anyone wishes to come after me, let him deny himself, and take up his cross, and follow me.” In another account Jesus tells a man to “sell his possessions and give to the poor…and come, follow me.”

Luke provides a couple of examples for what is required to follow Christ. In 9:59-62 we read, “Then He said to another, ‘Follow me.’ But he said, ‘Lord, let me first go and bury my father.’ Jesus said to him, ‘Let the dead bury their own dead, but you go and preach the Kingdom of God.’ And another also said, ‘Lord, I will follow you, but let me first go and bid them farewell who are at my house.’ But Jesus said to him, ‘No one, having put his hand to the plow, and looking back, is fit for the Kingdom of God.'” In Luke 18:28 Peter said, “Behold, we have left our home, and followed you.” When I read this verse, I couldn’t help but think of the Christians in the Middle East who have literally been forced out of their homes by ISIS.

Is Jesus calling you to drop what you are doing, and follow him into a life that he has for you? He may want to take you out of your own little world and put you to work for his Kingdom. It may not be easy. You may have to deny yourself of things and take up your cross, whatever that might be. You may not become a Hollywood actor but you will be in God’s trophy case- the ones who left what they were doing and followed him. You will be doing what God has uniquely designed you to do. There is no greater joy and excitement than that. I know.

What do you and I have to leave behind to truly follow Christ? An addiction, a relationship, success, a rebellious nature, a wrong way of thinking, media influences, or maybe some lifestyle? Apply Matthew 4:20 to your life. What would have to be left behind, or dropped , to follow Jesus with all of your heart, soul, mind, and strength?

John Livingston Clark is 67 years of age and lives in central Washington State. He has written two published books, and two published poems. His initial book is called, " God's Healing Hope: Breaking the Strongholds of Wrong Thinking." His second book, released in December of 2016, is a motivational book written to seniors titled, " Seniors: Are You Retiring or Recharging?" Both books are available on amazon. You can also view his writings on www.faithwriters.com. John is available to speak on a variety of topics. Visit me at jclarkministries.com
Previous A Little Leaven
Next Reality TV Truth?