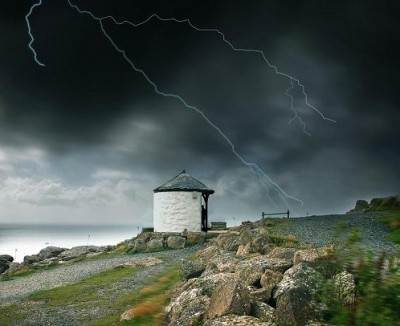 God's will is the safest place to be on earth.

God’s Will: The Safest Place On Earth

Do you have lingering thoughts of escapism in these uncertain days? Maybe you wish you could pack up and move to a rural cabin hidden in the hills of nowhere. Perhaps you wish you could escape to a different time, such as bygone days when terrorism and shootings and perversion weren’t nightly news.

When I watch old television shows of just a few decades past, it’s a kind of reverse culture shock how much the world has deteriorated. I can find myself longing for those “good old days” of childhood, when things were much simpler.

Not long ago, I was invited to speak at a camp retreat for teens, and as I drove deep into the country, mailboxes growing farther and farther apart, I thought how the area was so remote, I didn’t know if I’d be able to find my own house if I lived here. There was a wild appeal to be far away from civilization, and as this fantasy progressed, it was suddenly interrupted with this rueful thought: “If God didn’t desire for me to be out here in the wilderness, and I did it on my own initiative, it’s entirely possible I could be mauled by a bear or have a rock fall on me – as I hid out from the danger of civilization!”

In the book of Jeremiah, there’s an account of another prophet named Uriah who was also prophesying the truth like Jeremiah, making them both unpopular in the sight of the rulers they were warning:

“There also was a man prophesying in the name of Yahweh, Uriah, the son of Shemaiah, from Kiriath-Jearim, and he prophesied against this city and against this land like all the words of Jeremiah. And when King Jehoiakim, and all his warriors, and all the officials heard his words, then the king sought to put him to death. But Uriah heard, and he was afraid, and he fled and went to Egypt. Then King Jehoiakim sent men to Egypt . . .  And they brought out Uriah from Egypt and they brought him to King Jehoiakim, and he struck him down with the sword, and he threw his dead body into the burial sites of the sons of the people. However, the hand of Ahikam the son of Shaphan was with Jeremiah, so that he was not given into the hand of the people to put him to death” (Jeremiah 26:20-24).

Notice that the prophet who tried to escape was killed, while Jeremiah was protected, although Uriah appears to be a righteous man of truth. One wonders if his flight was outside the will of God, and therefore outside God’s protection.

John records of Jesus of those who hated Him, “They were seeking to seize Him; and no man laid his hand on Him, because His hour had not yet come” (John 7:30). This is the pattern for us as well. If our hour is not yet here, we need not fear anything. There is work to be done, so let us step up and do it!

God reminds us in these desperate times that the safest place in the world is the center of His will. As long as we keep close to Him and obey His voice, we cannot be ensnared by the schemes of man or the wiles of the devil, so long as work remains here for us to do.

What work does God have for you to do that fear is trying to rob?

Emily Tomko's radical encounter with the Lord while at a nightclub changed her life forever and inspired her first novel, College Bound: A Pursuit of Freedom. She is the author of seven books, including 31 Thoughts on Prophecy and Leaving the Shallows: igniting the faith that overcomes the world. Her tastes tend toward vintage and she's a Germanophile, having spent a year in Bremen and Nuremberg. Emily loves the scriptures and writes with fierce compassion and a deep desire to see people freed from the miry clay of this world and walking in the truth.
Previous Making A Difference By Doing Good
Next A Lesson From Wallpaper: Finding the Meaningful in Messy