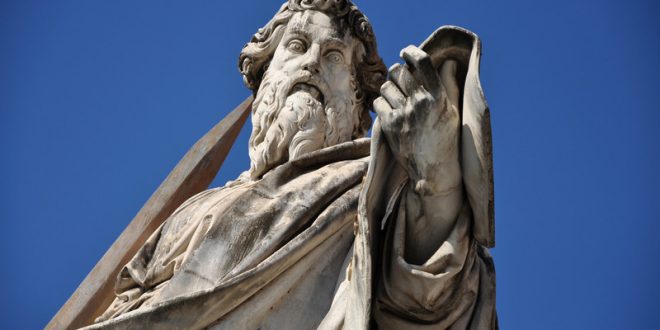 Heroes Of The Bible: Paul-The Greatest Christian To Ever Live

The Apostle Paul is the only person in history I know of who could preach a message of love and forgiveness on a regular basis and cause riots at the same time. Even today he causes no small amount of controversy. From his stance on sexuality to doctrines that have been the subject of theological conflict for millennia, Paul is probably the most influential man in church history, he is either loved or hated, but cannot be ignored.

Born as Saul of Tarsus he was a Roman citizen, highly educated in Greek philosophy and in the Hebrew scriptures, he even trained under the famous rabbi Gamaliel, the same man who convinced the Jewish rulers to not kill the Apostles (Acts 5). Saul also took on his father’s trade and made a living by making tents. Saul was a Pharisee who was devoted to the law, in his own words he was “circumcised on the eighth day, of the people of Israel, of the tribe of Benjamin, a Hebrew of Hebrews; as to the law, a Pharisee; as to zeal, a persecutor of the church; as to righteousness under the law, blameless.” (Philippians 3:5-6)

When we first meet Saul in the book of Acts, he is at the stoning of Stephen, the first martyr of the church. He then goes onto to become a major persecutor of Christians, to the point where he would go around kicking in peoples doors and drag them off to prison.

Acts 8:1-3  And Saul approved of his execution.

And there arose on that day a great persecution against the church in Jerusalem, and they were all scattered throughout the regions of Judea and Samaria, except the apostles.  Devout men buried Stephen and made great lamentation over him.  But Saul was ravaging the church, and entering house after house, he dragged off men and women and committed them to prison.

Saul became the enforcer of the high priest and chief persecutor of Christians, he was murderous in his intent to shut down the growing Christian faith.

Acts 9:1-2 But Saul, still breathing threats and murder against the disciples of the Lord, went to the high priest and asked him for letters to the synagogues at Damascus, so that if he found any belonging to the Way, men or women, he might bring them bound to Jerusalem.

Then something amazing happened to Saul, Jesus came to him, this man who was full of hate and murder and blinded him.

Acts 9:3-9 Now as he went on his way, he approached Damascus, and suddenly a light from heaven shone around him. And falling to the ground, he heard a voice saying to him, “Saul, Saul, why are you persecuting me?”  And he said, “Who are you, Lord?” And he said, “I am Jesus, whom you are persecuting.  But rise and enter the city, and you will be told what you are to do.”  The men who were traveling with him stood speechless, hearing the voice but seeing no one. Saul rose from the ground, and although his eyes were opened, he saw nothing. So, they led him by the hand and brought him into Damascus. And for three days he was without sight, and neither ate nor drank.

Saul met with a Christian by the name of Ananias, who had received a vision from God about Saul and went to him. And after laying hands on him, Saul regained his sight and was baptized.

Immediately he began preaching Jesus as the Son of God in the synagogues and his preaching was so fierce and convincing that Jews started plotting to kill him.

Acts 9:20-25 And immediately he proclaimed Jesus in the synagogues, saying, “He is the Son of God.” And all who heard him were amazed and said, “Is not this the man who made havoc in Jerusalem of those who called upon this name? And has he not come here for this purpose, to bring them bound before the chief priests?”  But Saul increased all the more in strength, and confounded the Jews who lived in Damascus by proving that Jesus was the Christ.

When many days had passed, the Jews plotted to kill him, but their plot became known to Saul. They were watching the gates day and night in order to kill him, but his disciples took him by night and let him down through an opening in the wall, lowering him in a basket.

Saul made his way back to Jerusalem, but the disciples did not trust him, except for Barnabas, who took him in and he eventually earned their trust. But his preaching was so strong that the Jews were seeking to kill him, a life long problem he would face, so the disciples sent him to Tarsus, where he would not be in perpetual danger of being murdered for his proclaiming Jesus.

Saul eventually took on the name Paul, which means small or humble in Latin. He also crisscrossed the Mediterranean numerous times on missionary journeys, set up many churches and wrote most of the New Testament, which includes Romans, 1 and 2 Corinthians, Galatians, Ephesians, Philippians, Colossians, 1 and 2 Thessalonians, Hebrews (though many scholars dispute he wrote it), 1 and 2 Timothy, Titus, and Philemon.

Paul endured many hardships in his ministry; in his own words: “Five times I received at the hands of the Jews the forty lashes less one. Three times I was beaten with rods. Once I was stoned. Three times I was shipwrecked; a night and a day I was adrift at sea; on frequent journeys, in danger from rivers, danger from robbers, danger from my own people, danger from Gentiles, danger in the city, danger in the wilderness, danger at sea, danger from false brothers; in toil and hardship, through many a sleepless night, in hunger and thirst, often without food, in cold and exposure. And, apart from other things, there is the daily pressure on me of my anxiety for all the churches.” (2 Corinthians 11:25-28), eventually he was decapitated in Rome during the persecution unleashed by Nero.

No other Christian has had the lasting impact Paul has had, down through the centuries, his story in the book of Acts and his writings have impacted millions of people. From a verse in Romans starting Martin Luther on the path of reformation of the Church to preachers being inspired by his life and setting off into the unknown to proclaim the Gospel, to his teachings influencing our entire civilization, no one other than Jesus Himself has had as much of an impact on the world the way Paul has.

How has Paul influenced your life?

Jonathan Kotyk is a student, self taught philosopher, recovering addict and born again Christian. He has spent time on both the far Left and Far Right side of the political spectrum and lives in Canada.
Previous Caution: Sin is Infectious!
Next Confessions of a Former White Nationalist