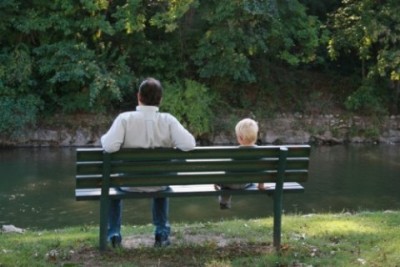 I Have Two Dads

What comes to your mind when I say the word “Father”? Do you smile or cringe? How about “Dad”? or “Daddy”? Do you think of warm memories or does your stomach begin to turn in agony knowing that the only father you have ever known was the one who chose to walk out on your mom. Or maybe Dad to you is someone who pretends to love you when he’s sober and hate you when he’s drunk. Maybe the idea of a Daddy has never been a memory at all because for all you know he never wanted you in the first place. I cannot even imagine the hurt and devastation you must be feeling.

What if I told you about a father who will never leave your or forsake you? That he knows the plans he has for you; ones to make you prosper and give you a hope for a future. A father who when he makes a promise, he keeps it and actually blesses you beyond anything you could ever imagine.

Did you know that you have a heavenly father who loves you? He knew you before you were even formed. Yes, he has seen every trial that you have ever been through. He collects every single one of your tears even the ones you have buried away. He loves you with an everlasting love. He is merciful, righteous, and just. You do not have to be perfect to be friends with his son. He will accept you right as you are and walk with you as you work through the pain.

John 3:16 “For God so loved the world that He gave his one and only son that whoever believes in Him shall not perish but have eternal life.”

is an author and editor for The Bottom Line Ministries as well as a member of Faith Writers. Currently she teaches high school language arts. She is a mom to four amazing blessings and enjoys every moment life has to offer. Renee has a fervor and drive to learn, she loves to read and spend time with her family, and is involved with her local church ministries. Humbled by God’s gift of words, she has a passion to write what the Holy Spirit has placed in her heart. She hopes to publish her in-progress book someday, but in the meantime, is honored to be placed as part of the TBL writing family and is holding on to the ride wherever God is leading. Renee and her family reside in their country home in Holland, Iowa.
Previous Pearl Of Great Price
Next Family Matters