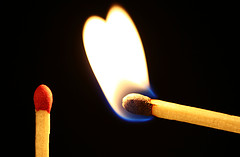 “You people should understand that we only obey Allah, we tread the path of the Prophet. We hope to die on this path … Our goal is the garden of eternal bliss,” said Abubakar Shekau according to Yahoo news.

Abubakar Shekau is an Islamist leader of the Nigerian militant group called Boko Haram. In April he and his entourage were responsible for the kidnapping of over two hundred girls from a private school in Nigeria. Since then, his group has continued to dish out terror in the name of their God.

I propose a troublesome question…What kind of God rewards evil, crime, and violence?

Definitely not the one I serve. The God I serve is a God of peace and mercy. He brings healing, security, and comfort. Nothing we do can earn His love, because it was already freely given. My God loves beyond faults, race, social status, or religion. I serve a God who forgives; a God who brings hope.

“For the LORD is good; his mercy is everlasting; and his truth endureth to all generations” (Psalm 100:5).

Boko Haram seemingly works tirelessly taking lives and tearing homes apart, all in the name of their God. These men insist on forcing their religion on others. They make it their duty to recruit followers—by gun point if necessary. And refusal could result in death. Recent news reported that some of the Nigerian girls taken in April have become Islam converts and were married off to Islamic men. What’s most bothering is that this militant group is truly confident this is what their God wants them to do. Their belief only empowers them to carry out their rampage with added bitterness and cruelty.

“Boko Haram is interested only in battle, hitting, striking and killing with the gun, which we look forward to like a tasty meal,” Abubakar said.

A God who takes pride in hatred and violence has to be a partial one. A God who endorses equality and justice, and frowns on favoritism, has to be a fair one. My God is the latter. “I am the LORD which exercise loving kindness, judgment, and righteousness, in the earth: for in these things I delight, saith the LORD” (Jeremiah 9:24). I’ll share my God with you; there’s enough of Him for everyone.

The choice is yours.

Click here to see the story on Yahoo News

Amelia Brown is from the beautiful island of Jamaica. She is a 28 year old Guidance Counselor by profession, but a passionate writer at heart. Most of her articles written are aimed at stimulating positive change under the guidance of the Holy Spirit. She is also a published poet and a member of Faithwriters. Outside of writing, she enjoys volunteering, cooking, and turning frowns right side up. Amelia currently lives in New York.
@ameliambrown
Previous If you don’t Submit to God, You can’t Resist the Devil!
Next You’re Not Wearing That, Are You?