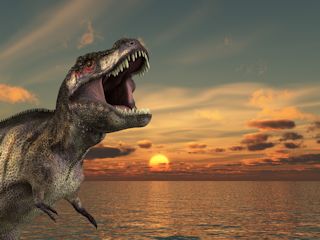 Is the T-Rex Fresh?

Yahoo News recently posted an article about what they believe dinosaurs tasted like millions of years ago. Of course, one of their conclusions was that they probably tasted a lot like chicken. Along with such was the bold claim of dinosaurs living 66 million years ago. Really?

In 1990 a fascinating discovery was made that gives a clue to the age of dinosaurs, and it’s not millions of years. You see, a T-Rex femur was found that had not fully fossilized, which in itself was an amazing discovery. What was even more amazing was that it had traces of the blood protein known as hemoglobin. If the femur were millions of years old, the hemoglobin would have completely deteriorated and such a shocking discovery would not have been made. More on this story can be read at the Creation Ministries International website.

Knowing dinosaurs had to have lived only thousands of years ago, rather that millions and millions of years ago, is good to know. This is because the age of dinosaurs has frequently become a stumbling block to people and kept them from believing in the Bible. Millions of years just doesn’t fit the timeline. However, knowing that these creatures roamed the earth with mankind gives us a better understanding of the Bible, and who knows, maybe someday we can find out what dinosaurs really tasted like by asking someone such as Abraham or Noah.

Joel M. Bauer is a 45-year-old U.S. Army Veteran from Dunn, NC, which is just outside of Raleigh. After being honorably discharged from the U.S. Army, he attended school at Taylor University, a Christian liberal arts school, in Fort Wayne, IN, where he received his BS in social work and psychology. He has worked in such places as a homeless shelter, a community based treatment center for severe mental illnesses, a school for troubled students, and other social service agencies. His current endeavor is to build The Bottom Line website into a site that inspires both Christians and non-Christians alike, and brings glory to God.
Previous Emily’s Hair
Next “Les Mousserables” Gets it Right