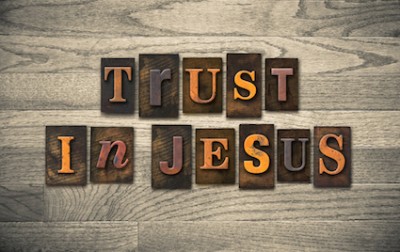 No matter what the need, His name is sufficient to meet that need.  Luke eight bears witness to this truth in a thrilling way. Luke, while walking with Jesus, saw Jesus heal a demon possessed man, heal a woman with a twelve-year bleeding problem, and he saw a dead child raised back to life.

Read on for some amazing details:

When Jesus entered the region of the Gerasenes, He and a demon possessed man crossed paths.  This man viciously attacked any town’s people who ventured near his area.  Were we to see him today, we might describe him as seriously mentally ill, weird and scarey, or just plain crazy.  When Jesus looked into the depths of the matter, He saw the root problem–demons–not just one, but thousands.  Not only did Jesus command the demons to leave the man, but He also sent them into a herd of pigs.  This resulted in all those pigs plunging headlong into the nearby lake where every one of them drown.  Jesus had, and yet has, the rule over the devil’s attempt to kill, steal, and destroy His Father’s prized creation–human beings.  The man’s life was spared and restored and he lived to glorify God for it.  Jesus saw the need and responded. (Luke 8:26-39)

The next experience Luke reported involved the ruler of the synagog who sought out Jesus on behalf of his only daughter who lay dying at home.  Jesus was thronged by the crowd; people were everywhere.  It would have been nearly impossible to get near Him, but, Jairus, the synagog ruler, managed to get close enough, long enough, to tell Jesus of his daughter’s need of healing.  The Bible doesn’t report Jesus immediately responding because at that pivotal moment, a chronically ill woman, plagued with a twelve-year bleeding problem, inadvertently interrupted the exchange.  She simply touched the hem of Jesus’ tunic and He instantly knew it.  (Luke 8:40-42)

“Who touched Me?” Jesus asked the closest disciple.

I can just see the floored look on this disciple’s face.  But, Jesus’ next statement revealed the real point of the question.

“I just felt power leave my body,” said Jesus.  Just imagine, one faith-filled effort, made by a desperate woman, to at least touch a piece of fabric worn by the Son of God, tapped into Jesus’ power.  The bleeding stopped and she knew it.  When the woman made herself known, Jesus pronounced her totally healed because of her faith.  Jesus felt the need and responded.  (Luke 8:43-48)

In the meantime, the synagog ruler received word that his daughter had died.  Jesus heard the message delivered.  He encouraged the ruler, “Don’t be afraid.  Just keep believing [since it was believing that brought you this far] and your daughter will be made whole.”  As the story concludes, Jesus raised the girl from death and returned her, alive and whole, to her astonished, thankful parents.  Jesus heard the need and responded.  (Luke 8:49-56)

Thrilling, isn’t He?  And able!

“Able to do what?” you may ask.  It really doesn’t matter what, because no matter what the need, Jesus is able.

What situation do you have today that you need Jesus to ably take care of for you?  Just believe.

I just love walking outdoors - day or night. I identify most with the creative side of God and am energized by His artistry all around this world. He amazes me every time I turn around! Yeah, God and thank you, Jesus.
Previous Transforming a Community With God-given Authority
Next Have You Looked into the Eyes of Jesus?