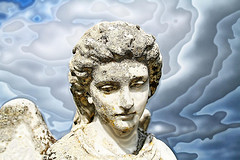 He was amazing to behold. He possessed a face like the sun, shining in full strength with eyes like flames of fire. Exhibiting a voice like the roar of many waters, he epitomized perfection. Glowing white hair covered his head; white like wool–like snow. His feet were like refined burnished bronze. His apparel comprised of a long white robe with a golden sash around his chest. Beyond the pearly gates he dwells in his throne room daily, ruling over the affairs of heaven. (Rev. 1: 13-16 ESV)

Such lovely description matches only one; Jesus Christ. The angels honored him daily, singing praises to his name and worshiping him in spirit and truth. They all loved him and accepted that he reign supreme…

Lucifer. He was dear friends with pride. He was truly an impeccable creation—and he knew it. He held the position of the highest angel in Heaven, but even that wasn’t enough. He wanted to be like God…in fact, he wanted to be God. I can just imagine his thought process would be something like this:

“I’m a great leader over the angels. I’m smart and beautiful. I’m confident I could even be a better God! Being second best cannot be as fascinating as being number one. I would be so powerful. Then I would be the one getting all the praise and glory.”

Though he held a favorable position, he couldn’t get over not being the ruler. He wanted to be a part of the God-head, so he formulated a plan of action…

The huge stone column concealed Lucifer as he eaves-dropped on the meeting between the Holy Trinity. He listened keenly, waiting for the perfect opportunity to debut his brilliant proposition. He found it and made his entrance. But his conceitedness made him over confident, and it didn’t prepare him for the rejection that followed.

God spoke up. “You were created beautiful and full of wisdom. Every precious stone was given to you. You’re an anointed guardian, leader of the angels. But I see that your glory has gotten to your head. Your beauty has made your heart too proud thus corrupting your wisdom. I ask you Lucifer please reconsider your blessings and be satisfied.” (Ezekiel 28: 12-17 ESV)

Lucifer was not pleased with the way things went. He conditioned in his heart to win over as many angels as possible, raise up a strong army, and ultimately take over Heaven. His evil drive and twisted motive allowed him to proceed with his plan of attack. Inevitably, war broke out in Heaven.

The air once light with sounds of sweet melodies was now heavy with sounds of clanging swords and screaming angels. The war was brutal, nevertheless, good prevailed over evil and Lucifer and his followers were defeated.

Being hauled to the feet of God, Lucifer awaited his judgment.

The battle between good and evil still continues here on earth…

Author’s Note: This compilation is my interpretation composed from biblical account.

Amelia Brown is from the beautiful island of Jamaica. She is a 28 year old Guidance Counselor by profession, but a passionate writer at heart. Most of her articles written are aimed at stimulating positive change under the guidance of the Holy Spirit. She is also a published poet and a member of Faithwriters. Outside of writing, she enjoys volunteering, cooking, and turning frowns right side up. Amelia currently lives in New York.
@ameliambrown
Previous What God Opens
Next Has Sports Become An Idol?