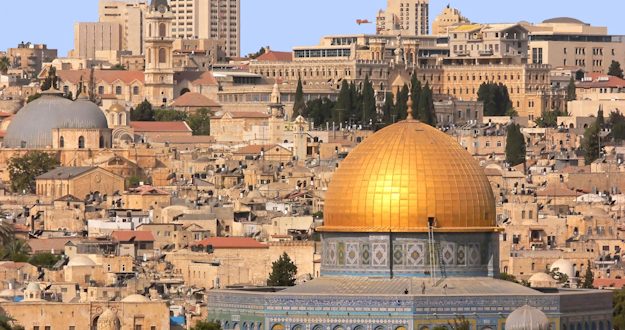 Oh Jerusalem, The City of the Jews

Jerusalem is mentioned throughout biblical history, often being referred to as the “city of God,” or the “Holy City.” Jesus entered this city victoriously while people waved palm branches. Christians celebrate this event on what is called “Palm Sunday.” For thousands of years Jerusalem has been associated with the Jewish people. The previous temples were built there. Jews congregate there every year at Yom Kippur. It is the hub of all Jewish government.

After Israel became a nation in 1948, two years later in 1950, Jerusalem was declared its capitol. The U.S. Congress in 1995 officially recognized it as the capitol when it overwhelmingly passed the Jerusalem Embassy Act. This mandated the moving of the American Embassy and affirmed that Jerusalem “remain an undivided city and for it to be recognized as the capitol of the State of Israel.” No president until Trump has had the nerve to follow through with this due to the political consequences.

There is much more significance to this decision than meets the eye. The Jews are seeing it as “an enormous step in bringing the Temple,” said Asaf Fried, official spokesman for the United Temple Movement. He went on to say that the recognition of Jerusalem as the capitol “…had to come from a non-Jew in order to bring them into the process, so they will be able to take their part in the Temple.” (Source: CBN News, “Is Trump’s Jerusalem Declaration an Opportunity to Build the Third Temple?”)  Zechariah 8:20-23 puts this in the prophetical context:

Thus says the Lord of hosts, It will be that peoples will come, even the inhabitants of many cities. And the inhabitants of one will go to another saying, ‘Let us go at once to entreat the favor of the Lord, and to seek the Lord of hosts; I will also go.’ So many peoples and mighty nations will come to seek the Lord of hosts in Jerusalem and to entreat the favor of the Lord…In those days ten men from all the nations will grasp the garment of a Jew saying, ‘Let us go with you, for we have heard that God is with you.'” Revelation 11:1-2 makes it clear that the next temple will be built in the “holy city.

There may also be a connection to a new peace plan currently being discussed between the U.S., Israel, and Saudi Arabia. According to an article by journalist Michael Snyder, the recognition of Jerusalem as the capitol and moving the embassy, possibly is speeding up any plan for peace. (Source: The United States, Israel, and Saudi Arabia Are Reportedly Pushing a Peace Plan That Would Create a Palestinian State.)

Now back to the Book of Revelation. Chapter 20, verse 4, mentions that Christ will reign upon the earth for 1000 years. Some believe that this is after the seven-year Tribulation Period. Some also believe that Jesus will rule from Jerusalem. Sean Gooding stated in his article, “So the stage is being set for the return of Jesus to rule the whole earth from Jerusalem.” (Source: “Jerusalem, The Capitol of the World”).

It seems then, as others have stated, that what has happened in recent days, along with the political and prophetic ramifications, that the fulfillment of end times prophecy and God’s divine agenda has taken a giant leap forward. What are other signs that you see in the news that are lining up with prophecy?

John Livingston Clark is 67 years of age and lives in central Washington State. He has written two published books, and two published poems. His initial book is called, " God's Healing Hope: Breaking the Strongholds of Wrong Thinking." His second book, released in December of 2016, is a motivational book written to seniors titled, " Seniors: Are You Retiring or Recharging?" Both books are available on amazon. You can also view his writings on www.faithwriters.com. John is available to speak on a variety of topics. Visit me at jclarkministries.com
Previous Our Gift to the Unbeliever
Next Joe, Don’t You Be No Fool!