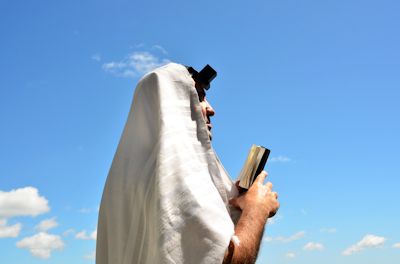 Preparations For The Third Jewish Temple

Besides having a nation they can call their own, the Jewish people have longed for a Temple to be rebuilt. That is becoming increasingly more and more likely very soon. Not only would it be a place of worship but it would fulfill a huge piece of Bible prophecy. Plans have been underway for quite some time to raise money and draw designs. The Temple Institute in Jerusalem has launched a fund raising campaign. In 60 days pledges have come in from 30 countries totalling $100,000. The money will be used for research and architectural planning. “The architect will fuse Jewish law with modern technology to prepare for a fully modern third Temple,” that will include underground parking, elevators, docks for public transportation and , of course, wheelchair access.

The Temple is considered more than a building. Rabbi Chaim Richman, International Director of the Temple Institute said, in reference to the fund raising effort, it’s a “spiritual reunification of mankind…” The promo video on the Indiegago page of facebook has 160,000 views. It is obvious, because of the response of the international community, that there is much excitement in the air from not only Jews but from Gentiles as well.

The exact location has not been mentioned. A group of people in Jerusalem want it built on the Temple Mount, even though it is currently a highly contested and heavily guarded site of three different religions, which includes the Dome of the Rock and the al-Aqsa Mosque. In the final analysis, the Temple will be erected where God wants it to be, and he can orchestrate events to make that happen.

What about all of the implements needed for worship made to Old Testament detailed specifications? The Temple Institute has been working on them since 1987. The work that has been completed and is in process can be viewed on the webpage entitled, “The Coming Third Jewish Temple.”

There is still more. In all of history there have been only nine perfect red heifers without defect according to the exact details of Jewish regulations, and there has not been one in 2,000 years in Israel. That is about to change. What is believed to be the perfect tenth red heifer required for sacrificial offerings was born at an undisclosed location in the United States in the early part of 2014. It is being raised according to very strict standards, and preparations are being made to have it transported to Israel.

There is talk that the third Temple will be built in time to fulfill the “70th week” prophecy given in the ninth chapter of Daniel. This, however, has to be interpreted with an understanding of Bible prophecy and the Jewish calendar. One thing for sure, the rebuilding of the temple may not be very far away. As time is drawing closer to this happening so is the coming of the Lord. Luke 21:28 tells us to lift up our heads because our redemption draws nigh.

John Livingston Clark is 67 years of age and lives in central Washington State. He has written two published books, and two published poems. His initial book is called, " God's Healing Hope: Breaking the Strongholds of Wrong Thinking." His second book, released in December of 2016, is a motivational book written to seniors titled, " Seniors: Are You Retiring or Recharging?" Both books are available on amazon. You can also view his writings on www.faithwriters.com. John is available to speak on a variety of topics. Visit me at jclarkministries.com
Previous There is Nothing Hidden…
Next Power and Purpose!