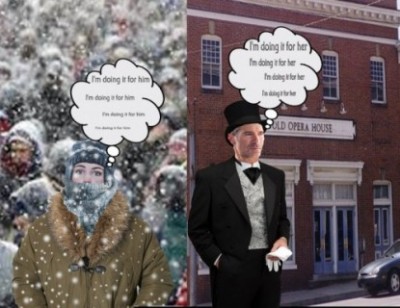 Man was brought into the world in God’s image, created with dust and clay; a mixture of elements that brought life to his physical being, (Genesis 1:26-27). Deep inside is his spirit, trapped in a body of clay, being held in place until the end of his days (I Corinthians 15:42-54).
Man was alone in the beginning and longed for a partner; for a soulmate, to serve with him in life, so God created woman from his side and the two worked together as one. The woman who God created for the man became his partner, and soon she persuaded him to take a bite from the one fruit God forbade them to eat. Life became much more complicated after that (Genesis 3:12-19); a sacrifice however, that the man was willing to make. The man could have refused to accept that bite, but because of his devotion to the woman, he was willing to shorten his own life to enjoy a shorter life with her.

Relationships aren’t much different today, if a man loves a woman, the man must prove himself to the woman. The same thing goes for the woman; she too must give up some things in life if she wants to be partner in a committed relationship. There must be sacrifice on both parts, each person must be willing to let go of certain things in their lives that may have been vital to their social life up to that point. Once they accept each other, and the sacrifices they’re willing to make for each other, life will probably become a little more difficult for both of them, especially in the eyes of their peers. This can sometimes prove damaging to the relationship, if either one lets it get to them.

The man or woman who is willing to give up the single life to begin a relationship will face some pretty drastic changes, and so often it fails because they are unable to adjust to the changes required by their partner. There has to be great resolve in the minds of each individual involved if they want to spend the rest of their lives together. The two must conform to one another’s needs and will be making drastic changes in their lifestyles to become for each other exactly what the other needs- a soulmate, (Ephesians 5:22-33). She must be willing to don that stocking cap, ear muffs, those two sweaters, that pair of fur lined boots, a scarf, some insulated gloves with mittens over top and a parka to go out to the ball park and freeze so he can watch a football game- BUT he must also be willing to miss one of those Sunday night games to go to the Ice Capades with her, if that’s the only night she could get tickets. Each will have to do things they normally wouldn’t do and he might get some flak from his friends for going to the opera, or the ballet, but he must remember, he’s not doing it for himself, he’s doing it for his spouse, and ultimately the only one anyone has to please is their spouse, so what friends say no longer really matters.

Deciding on a permanent relationship should not be taken lightly; it requires committing yourself to one person for the rest of your life, committing to their needs as well as your own. Yes kids may come along, and ultimately they will be the most important part of your lives for 20 years or so, but then they too must make a decision, and hopefully the relationship you have with your own spouse will be an inspiration to them.

It’s not too late, what are you willing to give up for your significant other, or future spouse?

Tim is a self-published author. His genre is Christian Fantasy- he loves the challenge of trying to combine Christian and Fantasy into a novel that loses none of it's spiritual value. Tim has been an active member in every Church he has attended. He has served as Head Usher, a Sunday School Teacher, and a Youth Director, and has also served as a Church Elder. Tim's prayer is that the Holy Spirit will minister through his words, and that his experiences and knowledge will be helpful to someone out there who needs a true friend like what we have in Christ Jesus.
Previous Power Over The Storm
Next Why One Pastor Chose Not To Be Homosexual