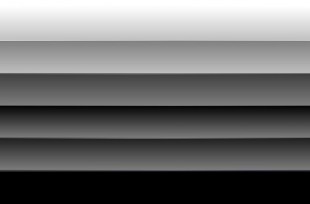 Talk About Fifty Shades of Grey!

Did you know you cannot always trust your senses, especially your eyes? Yes, the eyes are a miraculous part of the body in that they process information and send that information to the brain. Unfortunately, the eyes are easily fooled and can unwittingly send false information to our thought center. I discovered just how true this is while watching a television show about the concept of illusion.

To begin with, the host displayed a pair of boxes—one stacked upon the other. To the eye, the top box appeared to be dark gray while the box on the bottom appeared to be a light gray, almost to the point of white. Then the host asked if the two boxes were the same color. I was offended that the host had such little confidence in my observation skills. Of course they weren’t the same color. One was gray, the other white–or so I thought.

To prove that the two squares were, in fact, the same shade of gray, the host placed a dark gray circle on the top box, which immediately disappeared because of its perfect blending. The host then took that exact circle and placed it in the bottom square, and you know what? It disappeared again. It was the same color!

Come to find out, the shading and shadowing around the boxes tricked my eyes into thinking that I was looking at two different shades of gray when, in fact, the colors were identical. Only when the shading was removed, could I identify clearly and without doubt that the colors were the same. Crazy, huh? The show continued to baffle my mind and confuse my sight as it displayed illusion after illusion, and by the end, I realized just how gullible my eyes truly are.

The more I thought about it, the more I realized that I suffer from the same malady in my spiritual walk. When it comes to walking the Christian walk, I tend to depend on the old adage, “Seeing is believing,” but I now realize that this tired cliché may not hold water. In fact, it’s not supposed to, at least, not when it comes to living a life of faith. According to Hebrews 11:1, “Now faith is the substance of things hoped for, the evidence of things not seen.” When it comes to walking the Christian walk, seeing is not believing; believing is seeing.

Just as our physical eyes can be fooled by mere tricks and illusions, so can our spiritual sight be led astray by the darts of the devil. For example, when the children of Israel arrived at the Red Sea, they saw a dead end, but God saw an opportunity. When Lazarus died, his sisters saw only a grave, but Jesus saw a chance for resurrection. When I see there is, once again, more month than money, I see a problem, but God sees a chance to prove that He will supply all my needs. (Philippians 4:19)

Both our physical and spiritual eyes are quick to jump to conclusions based on appearances, but that information is not always correct. This is why it is so important to know and understand God’s promises. Then, when our sight tells us one thing, we can compare and contrast it with God’s Word. If what we see contradicts God’s promises, then we can know that our sight has been fooled once again because we know that God’s Word is true.

What are you looking at today that may or may not have you fooled? Are you quick to trust only what you see, or are you disciplined enough in your faith to put it to the test before jumping to any conclusions? Remember, when it comes to spiritual matters, believing is seeing, not the other way around.

Dana is a full-time Christian author and speaker residing in Greenville, SC with her husband and two dogs. In fulfilling her call to evangelize the lost and edify the saints, Dana spends her days writing devotions, devotional books and books for children, as well as recording podcasts on various Biblical topics. She serves in many capacities at her local church, including the roles of church pianist and ladies' Sunday School teacher. Dana has a passion for souls and longs to be used of God in whatever way He deems necessary. When not writing or serving at church, Dana can most likely be found reading or hiking a nearby trail.
Previous Wonder Working Power
Next Did You Walk Away From God?