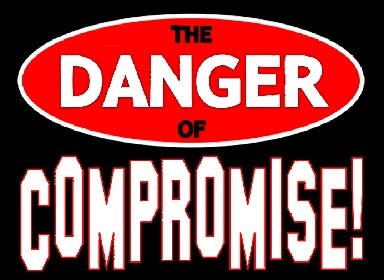 The Dangers of Compromise

We live in a culture that is saturated with compromise. Have you noticed that some who call themselves Christians are living like the rest of the world and are coming into agreement with what the world says is okay? There are dangers to compromising with the unbelieving world. The Bible makes it clear that God does not condone compromising His standards: Blessed are the undefiled in the way, who walk in the law of the Lord! Blessed are those who keep His testimonies, who seek Him with the whole heart! Psalm 119:1-2.

Solomon compromised with God’s way; he decided to give into his wives’ idolatrous practices for personal and political peace (1 Kings 11:1-8). Solomon’s example can teach us a lesson about how dangerous compromise with God’s law can be. Solomon had clear instruction from the Lord not to marry foreign wives, but he chose his own way despite the Lord’s commands. This seemingly small compromise of Solomon led him away from God. Solomon at first resisted the attempts of his wives who wanted him to worship their gods, then he tolerated their gods, and finally he became involved in idolatrous worship.

Compromising with the culture around us will not automatically cause a downfall in our faith, but subtly the enemy comes to destroy our walk with God. Separating yourself from what is spiritually impure is imperative to keep yourself from stumbling. The Canaanites, and the other nations that were mentioned, were to be completely wiped out however, Israel never did completely obey God’s commands on this (Deuteronomy 20:16-17).The Canaanites were constant trouble for the Israelites, and through Israel’s social and political interactions with them; they were persuaded to follow Canaanite practices. Soon there was no difference between the Canaanites and the Israelites. Once again we see, that compromise’s consequences does not happen immediately; but over time tolerance emerges then sin and destruction.

As Christians, we must make sure we are not allowing the world to contaminate us with unholiness. If we go into the world and act and behave as the world, where is our witness for Christ? We must be an influence on the unbelieving culture, not the reverse. If we begin to behave or think in ways like the people we are around, we are in danger of compromise. Make no mistake, the enemy is clever; he will use people you love and even Christians to get you to compromise.

It seems we live in a culture that is saturated with sexual immorality, drunkenness, violence, abortion, and the likes. Many in the church are aligning themselves with the very things that the culture around them are practicing. The lost world needs hope, not confusion. It is confusing to the unbeliever when we go along with they are doing that contradicts the Bible. Yes, all Christians will sin, but the difference should be we will not continue in that sin.

The world may say, “If you can’t beat them, join them,” but the Bible says, “Come out from among them and be separate.” 2 Corinthians 6:17. Even if you feel alone, or that you are the only one standing for truth; keep standing! You are not alone, there are others who stand with you. If you feel alone right now in this battle of compromise, would you share with us so that we may pray with you? When you decide to stand upon God’s Word, God will raise at least one person who will support you. (Daniel 1:5).

Stephanie has a heart and passion to see broken lives restored and redeemed through Jesus Christ. She writes through her personal experiences and her educational and professional background. She has over 17 years experience in counseling, and has a Master's degree in Social Work, Bachelor's degree in Psychology, and is a Licensed Belief Therapist. Stephanie has been married for 16 years,and has one grown son. Stephanie's desire through her writings is to bring hope and encouragement to the body of Christ, that no matter what you have been though or going through, there is restoration and redemption through Jesus Christ.
@Stephrreck
Previous Making Lemonade Out Of Very Sour Lemons
Next When Demons Come to the Surface