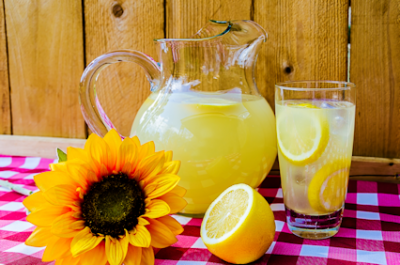 Have you ever noticed that people are drawn to stories of those who have been given some really bad circumstances (sour lemons) and have somehow persevered, beat the odds, and ended up coming out like a refreshing glass of lemonade?  These stories remind us that being grateful, forgiving, and going the extra mile to overcome make all the difference.

I came across two such impressive stories this week.  The first told of a man who served four decades in prison because someone told a lie about him.  When he was recently released, this innocent man chose to hug the man who had told the lie.  He told the one who lied that he had forgiven him.  The one who lied, through tears of disbelief, poured out the torture of carrying the knowledge of that lie. He walked through each day knowing the undeserved sentence of the innocent man.  The guilt of those facts caused him anguish every single day.  He was impacted by his victim’s forgiveness and grace.

The second story told of a twelve year old girl given away because her mother couldn’t keep her.  Adopted by a couple who lived far away, she walked into a family lead by a harsh, demanding, verbally abusive mother.  Her intensity was softened, thankfully, by a kind, supportive, and loving father.  The young girl remained polite and respectful even though she received unmerited sternness and abuse.  Consequently, the goodness in the heart of the mother was drawn out because of the child’s right responses.  The husband received the same poor treatment, but rose above it to see his unconditional love conquer in his wife’s life as well as in the life of the young girl.

There are many such stories like those above:  “Youth Rises to CEO from Ghetto Beginnings”, “Rape Victim Starts ‘Home Safe’ Ministry for Abused”, “Penniless Man Completes College Degree In 10 Years”.    Be encouraged, you, too, can move beyond your circumstances.  Everyday, people rise above their junk by using the negative circumstances of their lives as stepping stones to higher ground.  They overcome.  They refuse to let the sordid, gray and black clouds of their life force them into being someone they are not.  They strike out to create a sweeter recipe for their own story rather than accept what their life would attempt to stir up for them.  It doesn’t matter what your circumstances are, you choose the way you mix all the ingredients.  Create the rest of your life (from this point) in a way that causes such a giant thirst in others that they want to follow you – all the way up to the best lemonade stand in the world. (Romans 8:28)

How can you take any sour lemons you may see laying around you and make some of the most irresistible lemonade ever?  If you have a story to tell, please share.  We would love to hear it.

I just love walking outdoors - day or night. I identify most with the creative side of God and am energized by His artistry all around this world. He amazes me every time I turn around! Yeah, God and thank you, Jesus.
Previous ‘A.D. The Bible Continues’ to Premier April 5
Next The Dangers of Compromise