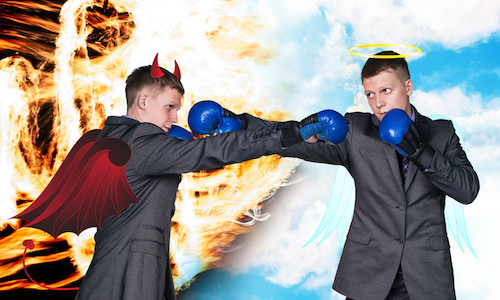 We Need God To Tell The Difference Between Good and Evil

Without God we do not know goodness, He is the standard by which we determine whether something is good or evil, He alone is the law-giver and informs our morality. That moral code is found only in the Holy Bible.

I know a lot of atheists will object to me saying something like that, but logic says that my claim is true, and further, I will use their prized logic to prove it.

We can observe that mankind does many things we universally condemn as bad or evil; things like murder, rape, theft and so on, but how do we know those things are bad?

Atheists will say they use reason to determine whether something is bad, but reason does not necessarily lead one to moral action or correct moral conclusions. After all, the Nazis used racial scientific theories to determine Jews were not human and so rationalized stuffing them into a gas chambers.

The atheist will then say it is by collective agreement that we determine something is good or bad; it is decided by the culture. But if that is true, then the Nazis were not wrong, since the majority agreed with what the party said and stood for.

The atheist will then point to the lawmakers and say it is the government that determines what is good or bad. Again, if that is true, then the Nazis were not wrong.

They will then claim it is empathy that determines if something is good or bad. They will say it is their empathy for others that says it is wrong to rape and murder. One problem with that however, is that humans do not all share the same level of empathy. Further we are easily desensitized to suffering and violence.

World War I veterans reported that after a few weeks of living in the trenches, with all the blood, mud, bullets flying, dead bodies and vermin scurrying around, they came to see all of that as normal. So empathy can be suppressed by external events and is not sufficient for creating a moral standard that applies to everyone, everywhere and at every time.

Finally, they will say that morality is determined by evolution. they will claim that we evolved morality as a way to increase our chances of survival via collective cooperation. The only problem with that is that evolution cannot be pointed to to say that rape, theft or slavery are wrong, since all can contribute to survival and continuation of the species.

In the end, they take the postmodern view and say morality is relative, it is all a matter of personal taste and does not exist as an absolute. If that is true, then murder, rape and theft are not wrong, they are just a matter of preference. They take this position because the only conclusion one can come to is that God determines what is good and evil, and that is not something they want to admit.

Because we cannot of ourselves determine what is good or evil, we need an external source to tell us what morality is. We need an authority to lay down the law and explain to us why things are good or bad. We have that with God. Being holy, He alone is the standard by which we judge what is good or evil, we compare things to Him and He tells us in His word whether something is moral or not.

But what about people who have never heard about God, or have never read the Bible, how do they know that murder is wrong?

Genesis 1:26-27  “Then God said, “Let us make man in our image, after our likeness. And let them have dominion over the fish of the sea and over the birds of the heavens and over the livestock and over all the earth and over every creeping thing that creeps on the earth.”  So God created man in his own image, in the image of God he created him; male and female he created them.”

Being created in the image of God gives us certain advantages, such as the ability to reason and an inborn but corrupted and uninformed knowledge of what is good or bad. It is corrupted due to the fall and uniformed due to us simply not knowing everything. But deep down we know that something is wrong, when it happens to us.

For instance, the atheist who denies that morality exists will very quickly say it is wrong to be punched in the nose and have his wallet stolen, just as soon as it happens to him. In like fashion, all wrongs are ultimately done to God and He experiences that pain. So He alone judges what is right and wrong, because He alone knows all things and sees all things, and being holy means He alone is capable of determining what is good and what is evil.

The Bible gives us a moral standard, to live by, the Ten Commandments, all of which are summed up by Jesus in the two greatest commandments

Is the law of God your moral standard? How does that standard effect your choices and interactions with others?

Jonathan Kotyk is a student, self taught philosopher, recovering addict and born again Christian. He has spent time on both the far Left and Far Right side of the political spectrum and lives in Canada.
Previous The Most Important Decision You Will Ever Make
Next I Wonder: What Have We Forgotten About Freedom?