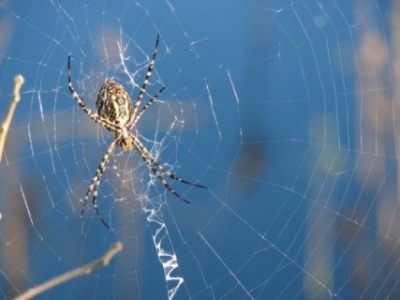 Weaving a Web of Destruction

The dainty and delicate beauty withheld in a spider’s web is one of awe and amazement especially if you have the privilege to watch the weaver spin his web. Each strand protrudes out in purpose, playing to its own perfected rhythm. Over and under the spindle moves creating an intricate design of entrapment. Ironically, at times, the spider may become entangled within its own web without even realizing what has happened.

We humans can fall along the same line of motion when we chose to deceive ourselves into believing that the choices we are making are justifiable while we weave our own lies of deception. Entangling our lives with words, which appear harmless upfront but leave an aftermath of consequences.

Take David for example, a righteous young boy who slayed the giant with a sling and a stone. Anointed by Samuel through God’s command, he pursued an upright life, leading his army, as only a King should do except the day he chose to stay home.

“Then it happened one evening that David arose from his bed and walked on the roof of the king’s house. And from the roof he saw a woman bathing, and the woman was very beautiful to behold. So David sent and inquired about the woman. And someone said, “Is this not Bathsheba, the daughter of Eliam, the wife of Uriah the Hittite?” Then David sent messengers, and took her; and she came to him, and he lay with her, for she was cleansed from her impurity; and she returned to her house. And the woman conceived; so she sent and told David, and said, “I am with child.” (2 Samuel 11:2-5)

David began his weaving the moment he chose to send his servants to fight the battle instead of himself. Letting down his guard, he sought after his prey. Consuming his physical desires, he began to shuttle the strands of deceit tightening the weave within the web. Calling back Uriah, Bathsheba’s husband, from the battlefield, David dines with him acting as if nothing has happened. He even encourages Uriah to go home, get cleaned up, visit his wife, yet Uriah refuses knowing that a man of God, a soldier for the king, should not be in comfort while the rest of his company is out on the battlefield sleeping in lesser conditions.

While the weaver’s guilt continues to harbor in his soul, he tries to find restitution by eliminating his burden. He sends Uriah into the hottest part of the battle.

“Set Uriah in the forefront of the hottest battle, and retreat from him, that he may be struck down and die.” (Samuel 11:15)

As the rest of the web is woven, David loses the child, and God sends a bold message demolishing the intricate web of lies of duplicity.

God can do the same for us as he has done for David.  No matter how many webs of deceit we have woven, he will always take us back.  He just asks for us to humble our hearts asking for his forgiveness.

What webs have you woven in your life and are now free from?

is an author and editor for The Bottom Line Ministries as well as a member of Faith Writers. Currently she teaches high school language arts. She is a mom to four amazing blessings and enjoys every moment life has to offer. Renee has a fervor and drive to learn, she loves to read and spend time with her family, and is involved with her local church ministries. Humbled by God’s gift of words, she has a passion to write what the Holy Spirit has placed in her heart. She hopes to publish her in-progress book someday, but in the meantime, is honored to be placed as part of the TBL writing family and is holding on to the ride wherever God is leading. Renee and her family reside in their country home in Holland, Iowa.
Previous How Do You Get Your Spiritual Food?
Next You Are The Man