Breaking News
Home / Faith / Who Is That in the Mirror? Your True Identity 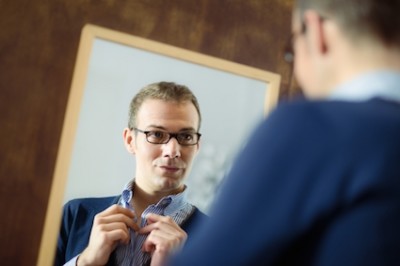 Who Is That in the Mirror? Your True Identity

To be honest, I haven’t always been James’ biggest fan.

While I know the Bible doesn’t contradict itself, I’ve alway wrestled with him about his perspective on grace. Some of what James says is difficult to reconcile with salvation by grace alone. But this morning, I heard an explanation of one of the most difficult passages in James—you know, the one about the mirror.

“But be doers of the word, and not hearers only, deceiving yourselves. For if anyone is a hearer of the word and not a doer, he is like a man who looks intently at his natural face in a mirror. For he looks at himself and goes away and at once forgets what he was like. But the one who looks into the perfect law, the law of liberty, and perseveres, being no hearer who forgets but a doer who acts, he will be blessed in his doing.” James 1:22-25

What is this mirror and how does it relate to a law of liberty? How does one forget what he looks like? And here James goes again with what our actions (works) should be.

One of my favorite pastors is fond of reminding us that the Bible wasn’t written in English. If we really want to know what the authors intended, we must take into account the original language. So, let’s see what this law of liberty is that is compared to a mirror.

The Greek word for “law of liberty” is: eleutheria. This actually means: license, the liberty to do as one pleases.

Imagine that! James, the guy who seems to weigh heavily on a Christian’s performance, is speaking about God’s law—what He requires of us—as liberty and a license to do whatever we want. It reminds me of Paul’s words: all things are lawful.

So, let’s look at these two men—one who is a mere hearer of the word and like one who forgets what he looks like; and the doer of the word who is blessed in his doing.

So imagine a man who looks into this mirror, the law of liberty, and sees who he is. If he believes in Christ for salvation, he sees a righteous man—the splendor of Jesus. If this man turns around and refuses to do what is written in this law of liberty, he has forgotten who he is! He has forgotten that he looks like Christ and is not living to the standard of his own identity!

However, if a man looks intently into the law of liberty and turns to face the world doing as the law has commanded—he remembers who he is. This man is acting according to his true identity.

One more comparison. If a young man, dressed in finery, looks into a mirror and then turns immediately to go play in the mud, he is either completely rebellious or has forgotten what he is wearing. But the second young man looks into the mirror and sees himself well-dressed and goes to do whatever that event was that caused him to dress well in the first place.

So you see, James’ insistence on being a doer of God’s Word, is not a harping on earning salvation by behavior or works. Rather, it is a reminder of who we are, what we look like now and how we are to act in accordance.

“But put on the Lord Jesus Christ, and make no provision for the flesh, to gratify its desires.” Romans 13:14

Who do you see when you look in the mirror? Are you living up to your identity in Christ?

Previous How Can Christians Share the Truth with Difficult People?
Next Dreaming God-sized Dreams