Breaking News
Home / Family / Can anything good come from Facebook? 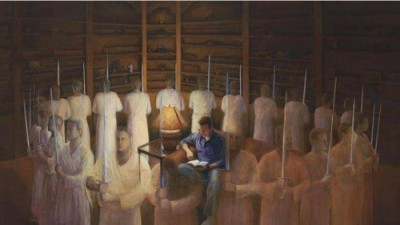 The number 40 has powerful connections in Scripture:  Moses on Mount Sinai, the Flood, the temptations of Christ and the desert wanderings to name a few.  For a mother in Colorado, and the thousands who joined her Facebook Prayer group, a recent 40-day period on social media told a new Bible story!  The humble, desperate faith of a mom warring against the forces of darkness chaining her son unleashed the power of the Word in thousands of lives.  The heartache and pain of one became the source of life for many because one believed and acted on the promises of the Holy Bible!

The story (and the struggles) began decades earlier.  From childhood, Tim fought the pull of darkness.  Born into a family committed to God, he

knew the Truth and practiced it in many ways.  Words of prophesy spoken over him at birth kept the flames of hope alive in his mother even as battles with behavior, school and drugs invaded their lives.  Marijuana at twelve and meth at fourteen became addictions that spiraled Tim downward.  The social boy who loved to be with family accepted the companions of drugs—homelessness, crime and being ostracized from all that was good—with heartbreaking determination.  Family pleas fell to deaf ears; detox and private schools failed; their prayers went seemingly unanswered.   His mom, Linda, the wife of a pastor grew weary.  A passionate plea from Tim’s older brother reignited her faith:  “Mom, we have to get some heavy Intercession for Tim, or we are going to lose him…”

She launched a Facebook Group, Praying for Tim.  Linda expected a hundred or so to join in the family battle plan.  Within days, thousands responded to the picture:  “This young man is our son…”  Feeding her own soul on the promises of the Word, she boldly claimed that what God said, He meant!

‘The courts of heaven receive the prayers of saints.  The gates of Hell shall not prevail.  Whoever calls on the name of the Lord will be saved.  God has good plans and purposes for each life…’

Other hurting hearts found comfort and power in those same truths and prayers assaulted heaven.  The first week, a friend shared their prophetic dream showing Tim stepping into a field ready for harvest.  Indeed, a harvest had already begun in the hearts of the pray-ers.

h pictures and prayers rooted in the Word, hearts united in prayer for Tim and thousands of others lost in various traps of Satan.  Then came the word that Tim called and asked for help.  The battle raged hotter as he descended again into the streets and slipped from human sight.  He reached the bottom as the slimy pits of street hell rejected him; attacked by another addict, weak and broken, Tim resurfaced and the strong hand of Jesus Christ pulled him back to safety.  Linda and family met Tim, brought him home and took him to Detox.  Healing began with sleep and food and continues now in a yearlong rehab.  The battle is not over, nor is the story fully revealed.

Praying for Tim continues…and it isn’t just about Tim.  It appears it never was just about Tim.  It is about living faith and the power that flows when hearts unite.  Jesus said He came that we might be one; sharing our broken-ness and weaknesses allows Him to unite us in victory.  The devil sought to destroy the Cannon family…but God meant it for good.  The super-abundance of God is still unfolding!  Prayer partners linked, groups connected, a sibling pursuing the pastorate, hearts encouraged, victories shared:  the glory of God flows in a way to continue the harvest and seed more fields.

What is the Bible story God is writing in your life?

Are you letting it flow into the lives of others?

Let His Word free your life to be all He desires it to be!

Billie Jo is wife to Craig and mom to Rusty and Riesa. Formerly employed in the human service industry, the past fifteen years have been dedicated to homeschooling. She is a freelance writer for a number of print and internet publications. She is also passionate about serving in the community. She works in a GED preparation ministry and a community-based servant program that provides opportunities for youth to serve others. It is passion for the love of Jesus and His transforming work that motivates her writing and serving. "I love to see God at work in the lives of others and this is the way I see best."
Previous You Can’t Expect To Bear Fruit If You Don’t Plant Seeds
Next On the Front Lines of Spiritual Warfare: The (Real) Exorcist