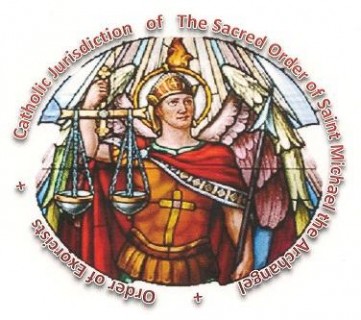 On the Front Lines of Spiritual Warfare: The (Real) Exorcist

Ephesians 6:12  “For we wrestle not against flesh and blood, but against principalities, against powers, against the rulers of the darkness of this world, against spiritual wickedness in high places.”

Recently, The Bottom Line (TBL) spoke with a man of God who is very much at the forefront of a topic that is depicted in horror movies, but is also quite real. Archbishop Ron Feyl, Chief Exorcist with the Sacred Order of Saint Michael the Archangel, discussed how his international group (based out of California) functions and what exorcism is truly all about.

TBL: Briefly describe your Order.  And, how common are exorcisms?

RF: Our organization is International with members in 24 countries. The total number of exorcisms from 15 jurisdictions is roughly 12,000 per year.  With 7 jurisdictions in 8 U.S. states, the national total would be over 3,000 annually.

TBL: It seems that most exorcisms are performed by Roman Catholic priests.   Why is that?

RF: Exorcisms are a part of all religions.  Catholicism is probably most well-known for its rite of exorcism, but other religions also perform exorcism rituals. Anglicanism, the Church of England, has a “deliverance ministry” with each diocese equipped with a team of both an exorcist and a psychiatrist. The Eastern Orthodox Church links demonic activity with disease, so much so that the blessing of fields includes an exorcism. The Lutheran Church bases it exorcism practice on the biblical claim that Jesus expelled demons with a single command. I could go on and on, but to sum it up, many religions and denominations have some form of ritual for exorcism.

RF:  We have a process for assessments.   We have our investigators do the first ‘face to face’ interviews which are taped on video for further reviews. There is a questionnaire we use in the first contact interview. The questionnaire consist of three sections, each are important for an assessment.  All three sections have 60 questions that are reviewed after the assessment report is submitted to my office with evidence, including documentation such as photos, videos, medical and psychological reports. We have three members in our Order who are medical doctors, and two are psychiatrists. They would review the medical and psychological reports and submit their findings with recommendations. After I have reviewed the assessment report of outward manifestations and if the evidence shows an exorcism is needed I would contact the bishop in that jurisdiction and a priest would be assigned to do the ritual.
TBL: What is your opinion of various pastors that never preach about Hell or of Satan?

RF: I feel that Christian pastors who choose not to preach about the demonic or Satan are not doing their full job in preaching the whole word of God.

TBL: Who calls you for help, and for what exactly?

RF: In regards to who call us for help, it is anyone who has problems with the demonic. We get a lot of paranormal investigators and people who are interested in the paranormal. We get a lot of cases that are demonic infestation. This happens when the door to the demonic is opened, either intentionally or unintentionally. Some cases are demonic oppression, which would be a mild to severe harassment by evil spirits resulting from the opening of some doors to Satan’s influence. The point of entry is the mind. Then we get some cases that are demonic possession which is rare, but does happen. TBL: Why is your Order named after Saint Michael the Archangel?

RF: Saint Michael the Archangel has always been known to be the great archangel warrior. The members in our organization are all warriors, fighting the good fight of good versus evil.

TBL: What do you say to people who do not believe in demons or exorcism?

RF:   What we do is very real.  So much so that on one occasion at an exorcism I ended up in the hospital in critical care after being bludgeoned by a demon- all in front of several witnesses.   I can say our best members in our Order were skeptics, until they were touched by the evil one and became believers.  I believe that everyone in their lifetime will be touched by Satan’s influence, and when that happens I hope they will seek an organization such as ours.

Ken Lambert, D.Min, lives with his wife and twin boys in southern New Hampshire, and has written for a variety of religious and secular publications. He is co-author of Top Ten Most Influential Christians- since the Apostles, and is an adjunct instructor for Agape Seminary (Church History, Wisdom Books).
Previous Can anything good come from Facebook?
Next All Christian Books are Okay to Read, Right? Not Necessarily