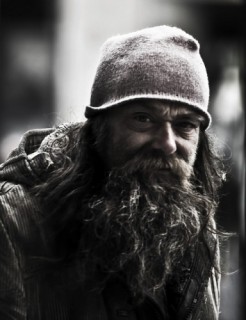 Cold and Homeless with an Attitude of Gratitude

There’s a man I know, a friend of mine, named “Billy”.  Billy is older (about 70), and I’ve known him for about 5 years.  I speak with him every week or two, but I don’t see him much as he lives a couple hours away.  Billy is a bit different than most of my friends.  First, he is about 30 years older than me, but most importantly- Billy is typically homeless and often hungry and cold.

He lives in various closed-up and abandoned houses, mostly with no electricity (or heat).  It’s December now and last night I’m sure he slept in a cold house that was little warmer than the 18 degrees outside.  He usually eats 1 (meager) meal per day, and sometimes when I’ve talked with him he has gone 3-4 days without food.

But, it doesn’t really bother him.

Billy has lived the kind of tragic life that could be the subject of a somber and dramatic movie:

Safe to say that Billy has led a life that should lead him straight to despair and self-pity.  Truth be told, he did spend a couple of decades struggling with alcohol, but he has been sober for over 10 years now.  When I speak with him, he is grateful for the air he breaths, for the beautiful nature of northern New England, for the few acquaintances that he has, and for the little things in life.  He is not a regular Church-goer, but he does certainly believe in God and he tells me that when he gets frustrated or down he looks up to the sky and prays.  He asks God for a little help, now and then.

Once in a while I try to help him, by giving him a few bucks or a pair of shoes, etc.  But he hardly ever asks for anything, and when he does accept anything from me or anyone else he feels guilty and a bit ashamed.

But it is I that feel ashamed when I call him and complain that I had a rough day at the office, or I spent all Saturday mowing the lawn or something like that.  I realize I am telling this to a man that has been through all that he has, and that doesn’t own 4 pairs of socks.

Most of us (in the United States) truly do have so much- yet we do not realize it.  Getting to know Billy has opened my eyes.  I can clearly see and appreciate that my life and its circumstances are quite good.  I believe it would be a great thing if everyone personally knew someone like Billy.  In many ways Billy does “need” our friendship, but perhaps I’m the one that needs it most of all.

Ken Lambert, D.Min, lives with his wife and twin boys in southern New Hampshire, and has written for a variety of religious and secular publications. He is co-author of Top Ten Most Influential Christians- since the Apostles, and is an adjunct instructor for Agape Seminary (Church History, Wisdom Books).
Previous A Home For The Holidays
Next Where Do We Go From Here?