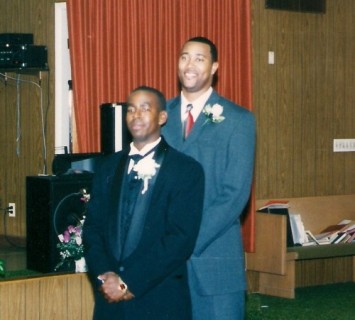 As a child, I kept a close friend who, in some respects, was closer than my little brother. Eric Tucker and I were inseparable as we grew from tiny tikes to terrible teens. But as we grew into young adults, our lives naturally took a curve. We still remained close, just as we are to this day. But Eric took a back seat, sometimes unwillingly, to the woman who would eventually become my wife. And years later, our friendship took another separation step when he married his awesome wife Kendell.

Eric is my best “dude” friend, but he will never be my partner. God simply didn’t build the two of us to cohabitate, comingle, or co-anything-else. So when I see Sally justifying her partnership with Lisa, or Brett standing up for his cohabitation and plans to start a family with Michael, I feel a tinge of fear for the people involved. I’m sure they don’t understand what God’s plan for marriage and true partnership means, and I’m afraid they have no idea what type of sin they are inviting into their lives by following through with their lusts for the same sex.

“For this reason a man will leave his father and mother and be united to his wife, and the two will become one flesh.”

My wife is closer to me than my best “dude” friend could ever be; exactly the way God intended. She is my life partner, given as a gift from God. The bible is pretty clear on how God feels about the subject of homosexuality, and it would be a direct affront on the Lord for any Christian to partake in the homosexual lifestyle. From the biblical standpoint, homosexuality isn’t holy. Adam and Eve were created for a reason. While Adam was given authority over Eve, she complimented him in the way God created them to behave toward one another.

My wife completes me, to make one flesh. She fills in my gaps and vice versa. Now while she never has an issue with me spending time with Eric, we all understand the nature of our relationships just as Kendell, Eric and I have an understanding. My friend will never be chosen over my wife, nor will he ever choose me over his own wife.

God’s definition of marital partnership works. The world today tells people to express themselves freely and deny no impulses. But what if that freedom of expression is one of the things God most hates? Having my wife as a partner keeps me from all sorts of sinful temptations such as adultery, lying and stealing. Friends may persuade you to indulge in some of those very acts. That’s why the partnership of biblical marriage is so important to the family. When God is set above the partnership, the union and entire family is blessed. Any union outside of God’s will is a recipe for sinful disaster.

@Ennis_C_Smith
Previous Character Lessons From A Day With My Son
Next Christians, politics, and the November election