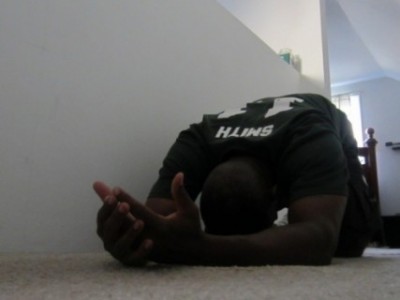 Humbled Before the Lord

My parents never prayed; at least I never saw them pray. Growing up, God wasn’t a high priority in my house. So, after turning my life over to Jesus, it was a bit awkward for me to submit myself physically to the Lord. Lowering myself to the ground on bended knees seemed to portray weakness. Mind you, this was in secret! I could barely bring myself to bow to the Lord behind a closed door. In church, I refused to raise my hands in worship to the God who had died for me.

But time passed, and the Lord broke through my foolish pride. Eventually, I learned that submission to God was not a sign of weakness. Once upon a time, I would quickly hop to my feet, the moment someone interrupted my prayer time. But, God opened my eyes to truth. It’s actually a good thing to allow my family to walk in on me humbling myself to the Lord; especially my sons. I want them to know what a God-fearing man looks like, submitting to the Lord. James 4:10 says,

“Humble yourselves before the Lord, and he will lift you up in honor.”

“So humble yourselves under the mighty power of God, and at the right time he will lift you up in honor.”

Most men are taught, at an early age, to express machoism in every aspect of life. Humility is a sign of failure that should be avoided at all costs. However, James and Peter both learned, first-hand, to submit to the authority of the Lord. In due time, they were both honored. Despite their lack of education in the law, or their small stature as meager fishermen, these men were destined to become key figures in the inner circle of the Lord. Through their humility and obedience, the world was changed. God didn’t use the strongest or the wisest among men to achieve His goals for spreading the gospel. He took fisherman into His midst; men who taught others to humble themselves wholeheartedly to the Lord.

When I learned that truth, it became easier each time I bent my knees to humble myself before the God who saved me. Eventually, I learned to prostrate myself completely. It did get weird once.

“Uh, daddy; what are you doing,” Isaiah asked the first time he saw me lying face down on the ground.

“I’m praying buddy,” I mumbled through the carpet.

@Ennis_C_Smith
Previous Our Hope: Remember
Next Hispanic Voters are Key to Conservative Politicians