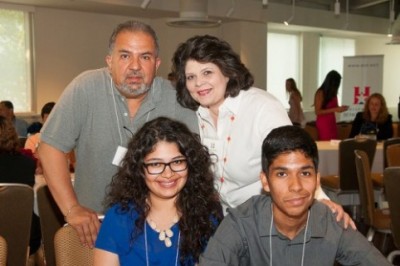 But will they turn out at the polls?  And if so, for whom?  Adryana Boyne, the National Director for VOCES Action, a 501 c4 nonprofit, is doing her best to be the bridge between conservatives, the GOP, and Hispanics across the nation.  On Tuesday, once again, Hispanic voters will help determine who leads their states and the country.

In general, Hispanics have traditionally over the past several elections voted overwhelmingly with the Democrat party.   In Texas, a state with a very large Hispanic population, the statistics bare this out.  On average, Texas Hispanic statewide (R) candidates receive around 40% of support from Hispanic voters  (in Texas).  Similarly, for the 2012 Presidential election, they voted for Romney at 33% and Obama at 59%- nearly double.  Boyne, and VOCES, are trying to change all of that.

“Hispanics are the present and future of the USA, and they also reproduce in larger numbers than Caucasians,” states Boyne. “They come in many races, colors, nationalities, and backgrounds of education. So they do not necessarily  think or look alike. But mostly they are people with values,”.  An Evangelical with a Catholic upbringing, Boyne says that church/Christianity is something integral to many Hispanics.  It is that issue that serves as somewhat of a disconnect; most Hispanics vote for Democrats who do not advocate for their social or moral values.

Clearly, much of the leaning to the Democrat party is due to the Republicans’ tougher stance on illegal immigration.  As such, VOCES does not have an official immigration policy or opinion.  However, Boyne declares “As a person I oppose amnesty and firmly believe in common sense immigration reform which will secure our borders and all ports of entry, and respects the rule of law.  I also believe we need a reliable  guest worker program,”.

VOCES does not have an official group opinion on some of the hotbed religious/ moral issues like gay marriage, but it is unabashedly Pro-Life.  They join the local Catholic Church and others in the March for Life.   From its website, the core values of VOCES are:  Pro Life, Traditional American values, Free enterprise, Limited government, Freedom  with responsibility, A strong national defense, Energy Independence, & Eliminating waste in the federal budget.

Boyne, who has appeared on FOX News on the Huckabee Show, is a regular commentator on Spanish-language Univision and Telemundo.  Regardless of what happen in this mid-term election, her name will become more common as the 2016 Presidential race heats up.   She knows, on a personal level, both Ted Cruz and Marco Rubio-  two likely Presidential candidates.  She is a close friend of Cruz’s father.  “They both hold conservative values and communicate well.  Both senators are strong leaders and I respect both of them,”.

The ever-growing Hispanic community in the United States will have a large impact on Tuesday, and an even larger one in 2016.  And Adryana Boyne is poised to be right in the thick of it.  At times it is an uphill battle, but she wouldn’t want it any other way.

Ken Lambert, D.Min, lives with his wife and twin boys in southern New Hampshire, and has written for a variety of religious and secular publications. He is co-author of Top Ten Most Influential Christians- since the Apostles, and is an adjunct instructor for Agape Seminary (Church History, Wisdom Books).
Previous Humbled Before the Lord
Next Congress is Funding and Printing Bibles?