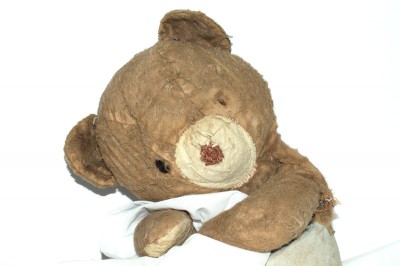 If I wanted to destroy a nation, I would give it too much and I would have it on its knees, miserable, greedy and sick.    JOHN STEINBECK, letter to Adlai Stevenson, Nov. 5, 1959

It’s hard to believe that a child’s stuffed toy can point one towards simplicity and contentment, and away from greed and moral decline. But one famous American author brings this idea alive in a letter he penned to Mr. Adlai Stevenson in 1959. John Steinbeck wrote such books as: Of Mice and Men, The Grapes of Wrath, and East of Eden.  He also wrote a letter of deep concern to his friend Adlai  about his view of the decline of morality in America.

In Steinbeck’s letter, he described America’s decline into greed with a word picture that only a writer could imagine. He said America was like a Christmas filled with gifts, little children the receivers. The wrapped gifts overflow in a room where those children tear them open, but keep asking for “more” from their guilt-laden parents who indulge their children and without knowing it, teach them greed.

The letter goes on to describe a hand-made teddy bear, given to one of Steinbeck’s grandchildren. The little bear, dyed a lovely brown, was made from the cloth of an old, discarded bath towel. It was a gift from “Daily,” a household helper of Steinbeck’s in England. She made bears with her own hands, often using a bit of real rabbit fur to make  them extra special for the receiving child. This bear was held dear as a gift that took time and was made with love and given to a child who treasured it.

What does this little dyed bear have to do with our children today?  He represents something that is missing from our busy lifestyle: simplicity. Too often, we parent out of guilt and find ourselves giving our children too many things. When we do this over the course of time, we may find ourselves and our children in the proverbial room of “gifts” with everyone shouting “more!”

How can we keep our children free from greed and the pursuit of more?

In the journey of parenthood, teaching contentment and thankfulness will help protect our children from greed and an attitude of constantly wanting more. There will be times of struggle and frustration, but God promises a good outcome when we see it through:

Teach a child to choose the right path, and when he is older, he will remain upon it. Proverbs 22:6

Do you struggle with contentment? What steps can you take to help your children learn contentment? In what areas can you better simplify your life?

My husband Dan and I have three children and three grandchildren. We live in central Illinois. I am a graduate of The Institute of Children's Literature, a member of faithwriters.com, and a member of SCBWI. My writings have been published at chirstiandevotions.us, in DevotionMagazine, the PrairieWind Newsletter, and here at thebottomline.co.
Previous How to Cope with a Recovering Drug Addict or Alcoholic
Next The History of “Casting Crowns”