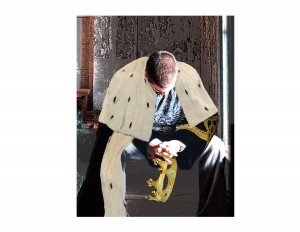 Man is no Longer King of his Castle

Man is no longer king of his castle; in fact he’s lucky if he even has a castle. Man’s role in society seems to be diminishing as well. Just by walking into your local department store, you can see how women’s lives reflect their role in society–quite often the women’s department is much larger than the men’s, boy’s and girl’s departments combined.

Has man become complacent because of the driving desire of women to be equal with men in society? In society men are often the ones out there dealing with the physical duties of an everyday job; they are often in the eyes of the community they serve. Women are more likely to be in an office somewhere, or inside doing work; very few see the hard work a woman’s job entails. This is not a bad thing, women are able to get jobs that are less strenuous physically, requiring more intellect, and the men do the more physically demanding jobs. Man was created that way, man has always been the more physical of the two. Granted, there are women out there who do physically demanding jobs, but it’s not a requirement and perhaps women think men are looking down on them because of it. Perhaps they feel that men look at them as the weaker sex, when it’s actually an equal trade-off. Man does the physical work, women do the mental work. Why do so many women feel bitter about this exchange?

Man’s responsibility falls to his employer during the day, and his family at night. He is a prisoner to them both, but needs to accept the importance of raising his family in a proper way so when his children have families of their own they will not be torn apart. The family unit has always been important–even in corporations they consider each employee as part of their family. Perhaps it’s time to consider your own family that way as well: each member has their job and they all work together to bring about a peaceful household. This may require biting tongues and making sacrifices.

The family unit suffers every time one of its members fails in their duties, just like a place of employment. The difference is that you can’t just fire the members of your family; it’s up to you to correct mistakes and continue forward. Each person needs to bear their own responsibility when something bad happens. It’s often an unintentional slip of the tongue, or an emotional flare up that caused the problem and that mistake should be dealt with immediately.

Man’s focus needs to be on the needs of his wife and family. The castle is not to give him security. It’s not a safe haven for him to crawl into at the end of a busy day where he can forget the stress of the day, expecting nothing but peace once he is safely ensconced in his castle. It doesn’t work that way, never has; man has gotten his priorities mixed up and now society and the family are suffering because of it.

Marriage is a joint effort and the tasks of the husband and the wife are equally important, but focus often falls on the man’s activities, such as his job, and the income he brings in. Focus on the woman is often unseen, and as a result, women feel that somehow they are less significant.

We owe much to the women in our lives–ask any grown person out there who inspired them most in their lives and they will more than likely say their mothers, (Proverbs 31:10-31).

Your spouse should be the one person in life who “gets you”, and understands when you fail, and once home you should have sanctuary from the heartless world. There should be a lot more heart at home. Each person should be able to recognize when their partner or child had a rough day and they should cater to them until they feel better.

The family is the only way to maintain sanity in this world, and that’s why it is so important to choose the right mate, and base the marriage on the whole person, not just the parts you love about them. Each of us have good points and bad points and we must accept them all to have a strong relationship worthy of bonds that won’t break, (Colossians 3:18-23).

What steps can be made to strengthen your family relationships?

Tim is a self-published author. His genre is Christian Fantasy- he loves the challenge of trying to combine Christian and Fantasy into a novel that loses none of it's spiritual value. Tim has been an active member in every Church he has attended. He has served as Head Usher, a Sunday School Teacher, and a Youth Director, and has also served as a Church Elder. Tim's prayer is that the Holy Spirit will minister through his words, and that his experiences and knowledge will be helpful to someone out there who needs a true friend like what we have in Christ Jesus.
Previous A Mouse, An Elephant, and the Sly Fox
Next Declare God’s Righteous Judgments