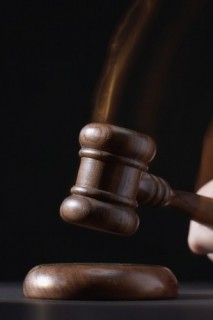 It is time to decree righteous judgments

Immigration, health care, and so-called same-sex marriage seem to be front and center in the scopes of America’s courtrooms. But what is really at stake is personal liberty and religious freedom. That is, Americans are swiftly and suddenly finding themselves impacted in their daily lives not by laws they voted on, but on legislation that is being handed down by the Supreme Court, or imposed by executive overreach (which is a genteel rephrasing of the word tyranny).

Following the 2012 election, one of the things I sensed the Lord emphasizing was: pray that righteous judgments be handed down in the courts. God is described in Scripture as “the Judge of all the earth.” (Genesis 18:25, 1 Samuel 2:10, Psalm 7:11) Every court, congressman, and king is subject to Him.

Do we as the church realize our authority? Do we understand that through Christ’s death on the cross, the powers of darkness have been disarmed for us? The Bible says that Christ stripped them and made a public display of them, having triumphed over them. (Colossians 2:15) Do we realize that the Father has put Christ far above all rule and authority and power and dominion, and every name that is named, not only in this age but also in the one to come? Do we comprehend what it means that He put all things in subjection under Christ’s feet, and gave Him as head over all things to the church, which is His body? (Ephesians 1:21-22)

Jesus instructed us to pray that God’s kingdom come and will be done on earth, as it is in Heaven. As members of Christ’s body, it is our job to bring all rulers and principalities, in this age and the one to come, under His subjection. This is achieved primarily through prayer and proclamation, and by declaring decrees. (Job 22:28-29, Psalm 2:7-9)

When we pray in the Spirit, according to the perfect will of God, we discover that the Holy Spirit loves to pray Scripture. The most powerful proclamations and prayers are declaring God’s Word. Psalm 82, a prayer for righteous judgments, is a favorite of mine to pray:

God takes His stand in His own congregation;
He judges in the midst of the rulers.
How long will you judge unjustly
And show partiality to the wicked?
Vindicate the weak and fatherless;
Do justice to the afflicted and destitute.
Rescue the weak and needy;
Deliver them out of the hand of the wicked.
They do not know nor do they understand;
They walk about in darkness;
All the foundations of the earth are shaken . . .
Arise, O God, judge the earth!
For it is You who possesses all the nations.

The Bible says “the saints will judge the world” (1 Cor. 6:2), and suggests that how we judge and discern in this life will determine the measure of authority we’re given in the age to come. (Luke 19:11-27)

The psalmist prophesied, “Now therefore, O kings, show discernment; take warning, O judges of the earth. Worship the Lord with reverence, and rejoice with trembling. Do homage to the Son, that He not become angry, and you perish in the way” (Psalm 2:10-12).

The hand of Jehovah moves at the prayers of His saints. What righteous judgments will you decree for the land? What do you expect God to do?

Emily Tomko's radical encounter with the Lord while at a nightclub changed her life forever and inspired her first novel, College Bound: A Pursuit of Freedom. She is the author of seven books, including 31 Thoughts on Prophecy and Leaving the Shallows: igniting the faith that overcomes the world. Her tastes tend toward vintage and she's a Germanophile, having spent a year in Bremen and Nuremberg. Emily loves the scriptures and writes with fierce compassion and a deep desire to see people freed from the miry clay of this world and walking in the truth.
Previous Man is no Longer King of his Castle
Next In the Palm of His Hand