Breaking News
Home / Family / Parenting the Way They Should Go 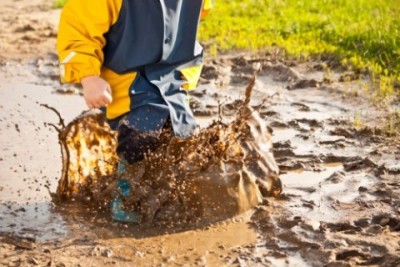 His small five-year-old hand lay gently in mine as we walked back to the van.  His beautiful boyish grin beaming from ear to ear as the puddle edged into view.

“Mom, can I please do a huge jump?” I knew all to well that the jump could render my work attire into a muddy mess, which was fine since we were headed home, but we really did need to be on our way home.

“No bud, not now.  We need to get going.  Your sisters are waiting.”

A pondering look rested in his eye as I saw his mind mulling over an idea. In a quick decision, he grasped a hold of my hand tightly and proceeded to do a “huge jump” over the puddle right in front of me.  Fortunately, he did good and cleared all of the water.  However, the one thing he did not succeed in was doing what I asked him to do.  Not jump.

“Son.” I began as he wriggled his legs up into the vehicle and into his seat.  “No means no.  Not maybe.  Not yes.  It means no.  I am not upset because you wanted to jump over the puddle.  I’m disappointed because you didn’t obey what I asked you to do.  Instead, you chose to go ahead and jump even if it meant getting into trouble.”  A brief silence elapsed between us as I helped him fasten his seat belt and settle in for the ride home.

“I’m sorry mom.”  His statement broke the silence and his thoughts began to spill out.   “I just really wanted to do a huge jump. I love doing huge jumps!”  His reply began to melt into my heart, but I had to follow through with my word-God’s word.  “Son.  I love you and I understand.  But if you are told no it means no.  You are to obey what you are commanded to do even if that means no huge jump.”  Moments later after soaking in what I had to say, he turned his head up his reflection in my rear view mirror showing a smile resting on his face once again.

Although my son’s simple act of disobedience may seem small to most, in my eyes, it is huge.  Imagine if I simply ignored my son’s decision to jump.  What would he do the next time I say no- to eating a piece of candy, running out into the street, staying out late with friends…  Certainly he wouldn’t take me seriously.  If I didn’t follow through the first time I said no, then why would he think I will the next time?  Kids catch on quick.

It may seem a far-fetched connection between such a small act, but the truth is it is not.  See the word “obedience” means “compliance with an order, request, or law or submission to another’s authority.”  Our daily lives are filled with obedience.  Obedience to our boss, co-workers, friends, and even the laws of our town, city, or state.  We are expected to comply with the wishes of others or laws which are in place.

God takes this manner seriously.  Lot’s wife chose not to obey when He said-Don’t look back! She became a pillar of salt (Genesis 19:15-26). Ananias and his wife decided to deceive the Holy Spirit. They both fell over dead because they had disobeyed what they were commanded to do. (Acts 5:1-10).

As parents, God instructs us to “train up a child in the way he should go; even when he is old he will not depart from it. “ (Proverbs 22:6) Our children are called to obey their parents “in the Lord, for this is right. “Honor your father and mother” (this is the first commandment with a promise), “that it may go well with you and that you may live long in the land.” (Ephesians 6:1-3).

Imagine if Jesus had chosen not to obey what the Father was requesting of him the night he prayed in the garden before his body was bruised, broken, and beaten for our transgressions.  Jesus was begging his father to take away what was to be done to him.  But eventually he surrendered asking that God’s will be done and not his own. (Matthew 26:39, Mark 14:36, Luke 22:42)  He chose to be obedient.

I challenge you as parents to say “no” in your words and follow through in your actions.  Teach your children to be obedient.   “A wise son hears his father’s instruction, but a scoffer does not listen to rebuke. From the fruit of his mouth a man eats what is good, but the desire of the treacherous is for violence. Whoever guards his mouth preserves his life; he who opens wide his lips comes to ruin. The soul of the sluggard craves and gets nothing, while the soul of the diligent is richly supplied. The righteous hates falsehood, but the wicked brings shame and disgrace.”(Proverbs 13:1-25)

is an author and editor for The Bottom Line Ministries as well as a member of Faith Writers. Currently she teaches high school language arts. She is a mom to four amazing blessings and enjoys every moment life has to offer. Renee has a fervor and drive to learn, she loves to read and spend time with her family, and is involved with her local church ministries. Humbled by God’s gift of words, she has a passion to write what the Holy Spirit has placed in her heart. She hopes to publish her in-progress book someday, but in the meantime, is honored to be placed as part of the TBL writing family and is holding on to the ride wherever God is leading. Renee and her family reside in their country home in Holland, Iowa.
Previous The Fire flames over the great debate: Christian Bands Crossing Over
Next Taking on Television and Movies