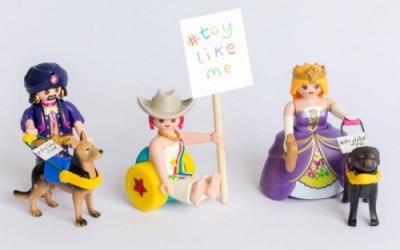 Parents around the globe are campaigning for a line of dolls that reflect the 150 million children who live with a disability.[1] The movement is called a “Toy Like Me” campaign and has created quite the buzz on social media outlets.

Put a trio of determined moms in a room and watch them change the world. The “Toy Like Me” movement was started in the UK by deaf journalist Melissa Mostyn, fellow deaf journalist Rebecca Atkinson who is also visually impaired, and former Play Consultant for Ragdoll Productions, Karen Newell, whose 5-year-old son is legally blind.

Growing up, neither Mostyn nor Atkinson saw dolls that represented their disability in a positive light. There were no blind dolls, no deaf dolls . . . they were all perfect. Now, as a mother to a child with a disability (Mostyn’s daughter is confined to a wheelchair), she’s determined that other children not have to face the same isolation. Atkinson was quick to join forces.

The women are now calling on major players in the toy industry to jump on board with their campaign. Facebook and Twitter fans are encouraged to upload images of toys—often handmade or toys that have been altered—that reflect outward impairments in a celebratory and positive light.

“If we are going to teach children, both with and without disabilities, positive attitudes, we need to have visible representation in mainstream high street toys,” says Mostyn. “Attitude towards disability starts in formative years. We want to see disability outside of the hospital playsets. Why can’t a fairy be blind?”

Speaking of fairies, a deaf Tinkerbelle doll was the first to go viral. In an effort to pressure the toy industry for “toy-box diversity,” the trio uploaded a picture of a Tinkerbelle doll that had been outfitted with pink cochlear implants. Within two days, the image was shared 650 times.

Despite the demand, the doll cannot be made available because it was altered specifically for the “Toy Like Me” campaign. However, earlier this month, British-based toy developer, Makie Lab, a 3D printing manufacturing company, introduced three dolls (aka “Makies”) to meet the campaign’s growing demand. These are the world’s first 3D printed toys in retail and depict dolls with hearing aids, walking aids and one with facial birthmark.  Their names? Hetty, Eva and Melissa.

“The ‘more diversity in the toy box’ campaign struck a chord with us . . .” the company posted to their Facebook page on May 13. “So our engineer Ant got to work on a Makie hearing aid, then a walking aid. Hmm, how about Makies with facial birthmarks? With the help of faceup artists like our amazing customiser [sic] friend Sioux, those are possible too. We’re super happy about this, and there’s more on the way . . .”

On Thursday, the company announced that they are soon releasing a doll with an insulin pump. The company has included a “#ToyLikeMe Endorsed” category to their website where parents can choose a doll and select accessories.

MakieLab CTO Matthew Wiggins said, “It’s fantastic that our supercharged design and manufacturing process means we can respond to a need that’s not met by traditional toy companies. We’re hoping to make some kids—and their parents!—really happy with these inclusive accessories.”

At this time, the offering is limited to hearing aids and canes, but the company welcomes any and all suggestions.

On Friday, “Toy Like Me” campaigners announced that Playmobil has officially become the first global toy brand to join the “Toy Like Me” toy box revolution.

“PLAYMOBIL CALLED US DIRECT!” the Facebook post read on May 28. “. . . We are literally twirling our Elsa dolls above our heads! We are flinging Playmobil knights and princesses around like joyous confetti! We are doing the conga up and down the aisles of Toys R Us!”

The response from supporters has been overwhelming. And while the company does not appear to associate with any form of faith, this campaign—this movement—immediately brought to mind the words in Psalm 139:14 (NLT):

“Thank you for making me so wonderfully complex! Your workmanship is marvelous—how well I know it.”

Jesus Christ absolutely adores each and every one of His children and celebrates their unique qualities. But in a culture that idolizes perfection, it’s difficult for children who are “different” to find joy in this verse. To accept it. By creating toys that better reflect the diversity among children, they may, for the first time, be able to celebrate what makes them unique and brilliant.

Which disability would you like to see represented by the “Toy Like Me” campaign? Let us know in the comments below and on Facebook, and be sure to include the hashtag #ToyLikeMe.

is a freelance writer and contract copywriter who lives in the seacoast region of New Hampshire with her husband, Eric-Thomas,of five years. She currently serves alongside her mother as the Marketing Director for God’s Girls Christian Store and More, a online retail store serving the southern New England region. Her work has been featured in several print and online publications, and she is the recipient of two Faithwriters’ Editors Choice Awards for her short stories, which are scheduled for publication in the Mixed Blessings series. Her first book, Fragile: 30 Days of Hope for the Anxious Heart, is now available at samanthaarroyo.com. She can be reached at [email protected].
Previous How Concerned Should We Be About GMO’s?
Next Teen Girls: Your Power Is Knowing the Truth