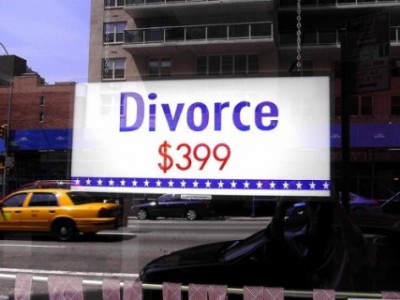 The Fault of “No-Fault” Divorce

Whether it takes place within the family of the Church, or outside, there is no question that divorce is one of the key ills of our modern American society. At its base it breaks up nuclear families, but via extension it works to dismantle much of the patchwork of our communities.  That said, the Church, and the government, should do its part in limiting divorce.

But, have “we” done that, or the opposite?

Starting in 1970, in California, the “no-fault” divorce became the law of the land. Prior to that, in order to attain a civil (legal) divorce, one of the spouses had to do something seriously wrong such as: committing adultery, abandonment, felony, physical abuse, etc.  But the no-fault divorce changed the game by allowing a couple to divorce even if no one was truly “at fault”.  This led to the most common reason for divorce in the present day:  irreconcilable differences.  This essentially means that if a husband and wife just cannot get along, it is reason enough for a civil divorce.

Naturally most persons that have been married for more than a year or 2 know that there are many seasons, days, and life experiences where the spouses do not get along. They disagree over many issues or emotions.   So given the government’s definition and quasi-encouragement, every single married couple today has legitimate grounds for divorce.

Where has that brought our country? The divorce rate has doubled between 1940 and 1981.  Today many people claim it is close to 50%; in reality it is likely closer to 20%- 25%.  Either way, most sociologists, politicians, and certainly all pastors would say that it is far too frequent- and the effects on welfare and society are substantial.

Some churches make it harder to divorce than others. The most obvious that comes to mind is the Roman Catholic Church, where it is extremely difficult to be granted a divorce within the Church.  There are many Catholic people who are “legally” divorced (per the State), yet they are not divorced as far as the Church is concerned.   For the most part, the best someone in this predicament can hope for is a marital annulment- which is complicated and controversial to say the least.  Whether you like this doctrinal practice or not, it is clear that these annulments have grown in frequency as soon as the “no-fault” divorce was enacted nationwide.

Marriage is not easy, but it has been shown to be the best means of ensuring the well-being (in a variety of ways) of children. Will there be a rescinding of the no-fault divorce rule of law?  Probably not- but the goal of the State and Federal government should be to do all they can to strengthen marriage, not undermine it.

Ken Lambert, D.Min, lives with his wife and twin boys in southern New Hampshire, and has written for a variety of religious and secular publications. He is co-author of Top Ten Most Influential Christians- since the Apostles, and is an adjunct instructor for Agape Seminary (Church History, Wisdom Books).
Previous God Is Not Dead
Next Digging Into The Mess By Faith