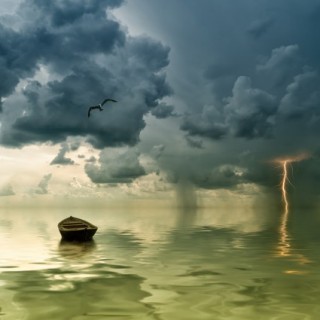 How could we have known what was coming?  That hot July day in 1978 held  blue skies, dotted only with wisps of cloud. Everything was quiet–a peaceful summer’s day.  We played in the neighborhood from early morning. Just after lunch, a neighbor spotted the funnel cloud in those otherwise blue skies.

We ran for our houses unaware of the funnel’s descent towards earth. As we sat crouched in basements, several families huddled together, the funnel-turned-tornado  ripped through  fields and uprooted trees in a nearby cemetery. When it was over, we were aware, even as kids,  that the unexpected storm could have brought complete destruction to our neighborhood. The storm moved on, almost as quickly as it came. All the neighborhood kids laughed and played in the gentle rain that followed, happy to be safe again.

Our lives often follow the pattern of that sunny, carefree day. We’re in a safe place, enjoying the good all around us, when suddenly a storm threatens. But the One Who calms the storms promises to be with us. The disciples of Jesus faced a sudden storm in Luke 8:25, and they knew they needed His help to survive. Jesus was peacefully sleeping as the storm tossed the boat, but He heard their cries for help and spoke to the storm. Immediate peace followed as He questioned His fearful disciples:

“And He said to them, [Why are you so fearful?] Where is your faith (your trust, your confidence in Me—in My veracity and My integrity)? And they were seized with alarm and profound and reverent dread, and they marveled, saying to one another, Who then is this, that He commands even wind and sea, and they obey Him?”

We often feel as though the unexpected storms that come our way will destroy what we care about. But Who better to trust than Jesus, the One Who’s in control through the wildest tempests? We cannot predict every storm. Just like that July so many years ago when a funnel cloud appeared on a beautiful day, the storm can roll in suddenly. Still,  we can trust the Lord–the One Who sees the storms ahead. And just like on that summer’s day, there will be joy again when the storm is over!

Have you been caught in an unexpected storm, one you feel unprepared to handle? How can your faith be strengthened by the words in Luke 8:25?

My husband Dan and I have three children and three grandchildren. We live in central Illinois. I am a graduate of The Institute of Children's Literature, a member of faithwriters.com, and a member of SCBWI. My writings have been published at chirstiandevotions.us, in DevotionMagazine, the PrairieWind Newsletter, and here at thebottomline.co.
Previous How to Answer Our Children’s Doubts About God
Next After the Judgement: The Second Death