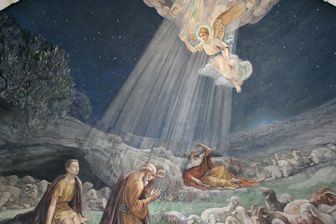 Previously, I learned that Jesus did not let the positives and negatives of His lineage define Him.  And my journey continued.

Jesus’ birth was anything but royal, even though He was King of all Kings and Lord of all Lords.  In fact, it was quite a humble birth by anyone’s standards.  His mother received no special breaks because she was the human mother of “God with us – Immanuel”.  She was given no reason or opportunity to be prideful at such a fine opportunity for a young Jewish girl.  Being obviously pregnant and unmarried, with a very unusual explanation, kept her humble.  She had labor pains.  She delivered her remarkable son in a very unremarkable place.  There was no family around to “ooh and aah” and no mid-wife available for her first birth experience – only an untrained, inexperienced, but God-trusting, young husband.  (I don’t know about you, but that would totally unnerve me!)  She had no complications.  Plain cloth was ripped into strips to swaddle her royal son.  He was born in the animals’ shelter for there was no human housing available to Him.  He was laid on the crispy hay in their manger.  (I can envision Him flinching from their warm, inquisitive “what-is-that?” breaths.)

His birth was announced royally, but only to common shepherds abiding in the fields while they kept watch over their flocks that night.  The pronouncement of Jesus’ birth came with lights, singing (action), and celestial beings.  Great joy and excitement filled the shepherd’s otherwise quiet arena.  Then these same shepherds, common as they were, hurried into the city to relay to the town’s folk the angels exciting message and to tell of their extraordinary experience…but who would think much of a plain ole shepherd’s remarkable story?  Yet, the intrigue of it all stuck with those who heard!

Our mighty God is really good at “unique” scenarios.  We might be tempted to think that our plain, common existence might be a foretelling of things to come; but, I caution you, our awesome God is creative beyond our wildest imaginations.  He can take our seemingly ordinary and use it in extraordinary ways.  In the blink of an eye, should He choose, He can turn our quiet, serene “day to day” into a wild celebration of wondrous things.  Jesus rose from His humble birth to fulfill His destiny and so can you and I.  And, I imagine that those shepherd’s were never the same again!

I just love walking outdoors - day or night. I identify most with the creative side of God and am energized by His artistry all around this world. He amazes me every time I turn around! Yeah, God and thank you, Jesus.
Previous Hezekiah You shall Live!
Next What is Marriage, Really?