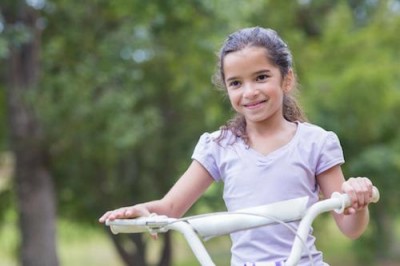 One of my epic failures in motherhood has been to successfully teach my youngest to ride her bike. I guess I should clarify. The concept has been grasped, it is the execution she finds daunting. She gets the whole idea of pedaling; it is just controlling the bike that is an issue. Whenever she gets out of control, going too fast, or just a little scared she jumps off. She will totally ditch her bike.

Despite countless warnings, skinned knees and dangerous crashes, she won’t stay on. I have gently explained that you cannot control the bike if you are not on it. If you want to regain control you have to stay on the bike. She absolutely refuses. Several failed attempts where one or both of us ends in tears, have caused her to give up completely. There is no childhood joy for her and that bike.

In an attempt to salvage this rite of passage, we took her to Callaway Gardens. Our goal here was simple; see other people riding and having fun and maybe she would too.

Now, my husband and I are fairly intelligent people, but we completely missed this one. Training wheels won’t go on trails. In our attempt to have a big, fun, family adventure, we overlooked the obvious.

We had started off well, everyone was happy. Then we rounded the corner and realized that the terrain was changing. My baby was doing fine on what she called “the smooth” (concrete). It was the mulch and the dirt that got her. I sent my oldest and my husband on, and I stayed behind with her. My only goal was to encourage her, and to try not to let her see my laughing as her wheels just spun in the landscape. She would pedal and do nothing but spin her wheels. As the dirt was flying and she was getting frustrated, I decided I had better push her.

I am certain that other people thought I was killing her as dirt and tears ran down her little face. I’ll admit we were a sight to see, and then it got worse. She quit on me. Complete and total surrender to the trail. White flag failure. She made every possible excuse, blamed anything and anyone around, and then sat down, took off her helmet, and cried.

I am sure you can envision this battle of wills in the middle of the forest. She was determined to quit. I offered no reprieve. I picked up her bike, put her on it and said, “Pedal!”

Her big, blue, eyes looked at me in bewilderment. She was tired. She was hot. She was DONE. But … we were in the middle of the journey, and there was only one way out. She had to pedal. If we were to get through this, she had to get back on and start again. I had just about given up on her making it and then I saw her face. She heard something. the part of our party which had gone on before us. From way down the trail, she could hear her sister:

“Come on, you can do it. You are a big girl. Get on your bike and ride! I know you are tired, but I just did it. The next part is smooth, it is flat. Ride to me! I am waiting for you, come on!”

Her little face lit up, she got on the bike and started to try. Then she heard the booming voice of her daddy coming through the trees. “Let’s go little girl! Keep pedaling. You can do this, I am over here. Ride to me. I am not going to leave you. Get out of the dirt, and get over here.” She started talking to herself, “keep pedaling, almost there. I can hear them. I can do this. Look Mommy, I am doing this.” By the time we actually got to them I was in tears. My baby had just had a personal victory, and it was all over her face. It was hard, and dirty and exhausting, and she had done it. I had just witnessed a holy moment.

You see, God drew a parallel for me between our humanness and His holiness. Sometimes life is hard, it gets downright dirty. You get stuck. It is easier to quit than to keep going. Your wheels won’t turn and the path isn’t smooth. The day is getting long and your strength is failing.

BUT
There is a Father waiting for you, and a great cloud of witnesses who have gone before cheering your name.

“Therefore, since we are surrounded by such a great cloud of witnesses, let us throw off everything that hinders and the sin that so easily entangles. And let us run with perseverance the race marked out for us … “ (Hebrews 12:1)

The way may be thick, and you may be getting tired. With dirt on your face, skinned knees and tears, get back on the bike … and pedal!

What has you tired and frustrated and feeling like a failure right now?