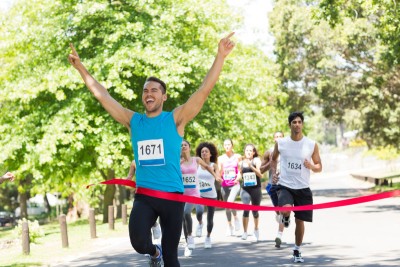 Robin Arzon: a determined example of taking the negatives of life in stride and coming out a winner.

Just like most young girls, she had dreams.  She decided to follow in her father’s footsteps and become an attorney.   Approximately a year from college graduation, she inadvertently became involved in a hostage situation.  An irrational man, armed with three hand guns, a sword, kerosene, a lighter and a wish to kill himself and as many others as possible, entered the establishment where she and her friends were gathered.  With a lighter and gun held to her head, Robin communicated with the police for the irate man.  Fortunately, two other hostages rushed the man giving police the opportunity to save the day and the lives in that place.

Although reeling from the harrowing experience, she managed to continue her schooling.  She graduated from law school and became a lawyer serving seven years in a prestigious law firm.  During this time, she unexpectedly discovered her love for running.  It became her undying passion.  The drive was so strong that she decided to follow her heart and quit her safe, prominent job.  She threw caution to the wind.

Her first job involved writing as a free-lance journalist…green as a gourd.  She also started a blog.  She surrounded herself with like-minded people who could spur her on in the challenging times.  Working as a running coach, cycling instructor, and ultra-marathoner earned her the title “Ambassador of Sweat”.  It was during this time that doctors found she had Type 1 Diabetes…at the young age of thirty-two.

She didn’t question, “Why me?” or “What next?”  She simply sought out the doctor’s advice about the steps she would need to take to be a healthy athlete with Type 1 Diabetes.  She followed the advice and managed to finish her fourth New York City marathon as a Type 1 Diabetic.  She commented that she believed she was made stronger because of the Diabetes.  She shared with others, “I really believe we need to trust our struggles.”

2 Corinthians 12:10 tells us Paul was a person much like Robin Arzon.  He didn’t fall apart when things went wrong.  He persevered and used his negatives as stepping-stones to victory.  Yes, there were some extreme negatives that Paul dealt with, but he trusted those struggles to God’s mighty hand and His unique plan for his life.  You and I also meet with extreme negatives at times, but let’s follow Robin and Paul’s example.  We can also follow our heart and trust our struggles to make us stronger and ultimately a winner!

Psalm 16:9 says that we plan our way but the Lord directs our steps.  What struggles do you need to trust to make you stronger?  What is your passion?  Where does your heart want to take you?  What steps will you take next?

I just love walking outdoors - day or night. I identify most with the creative side of God and am energized by His artistry all around this world. He amazes me every time I turn around! Yeah, God and thank you, Jesus.
Previous They Are Babies, The Evidence Is Undeniable
Next Not by bread alone: answering every unknown with the word of God