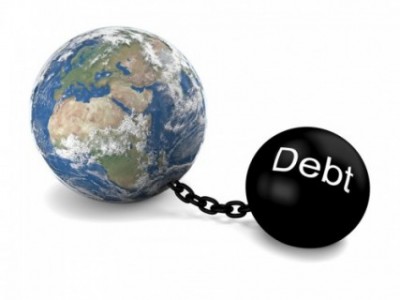 Matthew 18:24-27” “When he had begun to settle them, one who owed him ten thousand talents was brought to him. 25“But since he did not have the means to repay, his lord commanded him to be sold, along with his wife and children and all that he had, and repayment to be made. 26“So the slave fell to the ground and prostrated himself before him, saying, ‘Have patience with me and I will repay you everything.’ 27“And the lord of that slave felt compassion and released him and forgave him the debt.” How much is 10,000 talents you may ask? It is 2,250,000,000 dollars or 150 years’ worth of wages. This is what the slave owed the king. The King had compassion on the slave and forgave the debt with one wave of his the hand. Just like that a debt of 2,250,000,000 dollars was forgiven by the grace of the king toward the slave.

This illustration in Matthew18:24-27 is representative of what God did for mankind. The king symbolizing God and the slave symbolizing lost man. Remember in the garden when man disobeyed God and plunged all of us into eternal sin? We became enslaved to Satan and we brought sin into the world to rule over us. We obviously could never pay God back this unthinkable debt. What was man to do? Man could do absolutely nothing and on top of it he did not even say he was sorry to God. He did not even try to pay this impossible debt back.

So what does God do? He sent Jesus to pay the debt for us and we can never pay back his grand act of compassion. God did it out of his great love for us and He did not even ask us to pay him back. He took the initiative and paid the ransom back without even asking us if we wanted him to or not. Think about it God died for us to redeem our debt and he did not ask us to pay him back. We could never pay him back if we tried for the rest of eternity. This was our 2,250,000,000 dollar debt we owed our King.

Greg is a born again believer who testifies to the absolute transforming power of God's word. Greg has been called to full time ministry and He has known Jesus for most of his life. Greg received his degree in Pastoral Ministries from what was formerly Bethany University in Santa Cruz,California. View Greg blogs on iwriteforjesus.com. Greg has a book published on " To Jesus Christ the High Priest of my confession: A personal Testimony." find it on http://www.amazon.com/Christ-Priest-Confession-Personal-Testimony/dp/1507706847/ His testimony in short form is published in "Trials and Triumphs II" on http://www.amazon.com/Trials-Triumphs-II-FaithWriters/dp/1498416012/. This book is filled with 50 inspirational testimonies and is a project of Faith Writers.
Previous Broken Made Whole
Next A Hidden Word of Truth