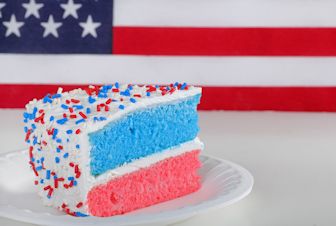 Happy Birthday To “The Star-Spangled Banner”

Happy Birthday To “The Star-Spangled Banner”

We recently celebrated the anniversary of the United States’ National Anthem. On September 13, 1814 Francis Scott Key wrote a poem about the American defense against the British attacking Ft. McHenry in the war of 1812, which became so popular that it was set to music. In 1931, “The Star-Spangled Banner” became the first official nation anthem. September 13, 2014 was the 200th anniversary of this patriotic song, sung in association with the American flag.

Here is a brief history lesson. People often think of Betsy Ross as the person who made the first flag. That is open to debate but history does provide some record that she was asked by her close friend George Washington to sew a flag because of her expertise in upholstery. She provided flags for the government for 50 years. The flag was authorized by the Continental Congress in 1777.

The colors of the flag were originally part of the Great Seal of the United States. In 1989 a book entitled, “Our Flag,” published by the U.S. House of Representatives, attached a meaning to each color. Red signifies hardiness and valor. White symbolizes purity and innocence. Blue stands for vigilance, perseverance, and justice.

The American flag has undergone many revisions over time due to the addition of new states added to the UnIon. The current one that we salute today was modified in 1958. It was designed by a 17-year-old high school student named Robert G. Heft during the time when Alaska and Hawaii were being considered for statehood. He did it as a class project, and his design was chosen out of 1500 submissions. It was adopted as the new version by President Dwight Eisenhower in 1959.

“The Star-Spangled Banner” has four stanzas. The first one, which is traditionally sung, was scribbled on the back of a napkin. To hear all four watch the video below. Happy birthday, and may long live our freedom!

John Livingston Clark is 67 years of age and lives in central Washington State. He has written two published books, and two published poems. His initial book is called, " God's Healing Hope: Breaking the Strongholds of Wrong Thinking." His second book, released in December of 2016, is a motivational book written to seniors titled, " Seniors: Are You Retiring or Recharging?" Both books are available on amazon. You can also view his writings on www.faithwriters.com. John is available to speak on a variety of topics. Visit me at jclarkministries.com
Previous What Do You Want To Hear?
Next Back Talk