Breaking News
Home / Featured / If Not Us…Then Who? 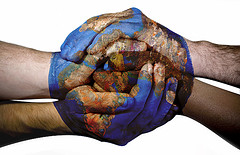 Take a look at this food for thought…

How many times have we allowed that to happen?

There is so much we can do to make this world a better place, but we are confident that someone else will do it. We need to stop waiting on someone else to do. Instead, you and I need to put change in motion by actively reaching out to those around us in whatever ways we can. Being our brother’s keeper and winning souls for Christ’s kingdom is a job for us all. If not us, then who?

Ms. Angel, as she is passionately called by the community kids, decided that she’s not going to wait on “Somebody” to start praying for the children in her community. She had experience a harsh life of abuse and drugs in a violent community, and she wanted to make a difference. Having a personal testimony of how prayer changes things, Ms. Angel decided to reach out in prayer. As a result, she formed a team of prayer warriors called “Go Ye.” They go to various bus stops in the neighborhood, and pray for all the kids before they get on the school bus. This brave woman chose to get active in an effort to offset the increasing amount of youths turning to crime and violence. She prays in hope that the children come to know Christ, who will in turn influence the decisions they make as they grow older.

Matthew West wrote a song called “Do Something,” which speaks specifically to all of us taking responsibility for the change that needs to happen in our world. Christ is this change. Under God’s directions, we each need to rise to the task of finding different methods of implementing solutions to mend our broken world. Choose to tackle hunger, crime, hatred, homelessness, child abuse, and the likes. Just pick one and spring into action.

Proverbs 14:23 says “In all toil there is profit, but mere talk tends only to poverty.” What will you choose to do today? Mo more delay. Get up and start teaching, volunteering, giving, building, inspiring, and or praying; whatever you can do, start now. Let us stop talking and waiting and start doing.

Amelia Brown is from the beautiful island of Jamaica. She is a 28 year old Guidance Counselor by profession, but a passionate writer at heart. Most of her articles written are aimed at stimulating positive change under the guidance of the Holy Spirit. She is also a published poet and a member of Faithwriters. Outside of writing, she enjoys volunteering, cooking, and turning frowns right side up. Amelia currently lives in New York.
@ameliambrown
Previous Once Like A Bird
Next Turning Around My Perspective