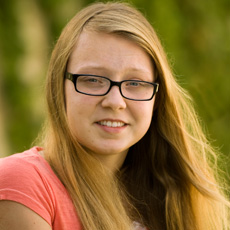 16-year-old Auburn Smith is a living inspiration for friends, family and her local community. Born with spina bifida; she has been able to learn how to walk with braces and maneuver her wheelchair on the tennis court like she has been doing it all her life. Currently, she is a junior at Spruce Creek High School located in Port Orange, Florida.

Auburn has been part of a tennis team that has won its conference every year since 2004. The young tennis star is ranked eleventh among junior girls playing on wheelchairs in the United States, this being quite an accomplishment. The tennis ball is allowed to bounce twice on her side of the court which is quite equitable considering she plays the game in a wheelchair. Watching her play, you would never know she was in a wheelchair gracefully synchronizing every move in perfect timing with the movement of the ball.

This year she sported a 4-1 record including three doubles victories. Auburn truly is an inspiration to us all considering she has overcome a condition that prevented her spinal cord from fully developing. Despite this she has not let this stop her from fulfilling her dreams to play tennis and learning to walk with leg braces. Auburn is also a testimony to all of us that no limitation in life can stop us from fulfilling our dreams and by God’s grace we can do the impossible.

Easter Seals has played an integral part in Auburn’s success on and off the tennis court.  Her parents enrolled her in their therapy program, and the initial support team was instrumental in instilling confidence in her parents so that they were able to make a big difference in their daughter’s life. They said they would have her walking by the time she was two years old and they followed through on that promise.  Auburn also enjoys riding her bike and is an aspiring musician.

Greg is a born again believer who testifies to the absolute transforming power of God's word. Greg has been called to full time ministry and He has known Jesus for most of his life. Greg received his degree in Pastoral Ministries from what was formerly Bethany University in Santa Cruz,California. View Greg blogs on iwriteforjesus.com. Greg has a book published on " To Jesus Christ the High Priest of my confession: A personal Testimony." find it on http://www.amazon.com/Christ-Priest-Confession-Personal-Testimony/dp/1507706847/ His testimony in short form is published in "Trials and Triumphs II" on http://www.amazon.com/Trials-Triumphs-II-FaithWriters/dp/1498416012/. This book is filled with 50 inspirational testimonies and is a project of Faith Writers.
Previous Self-Evident Truth
Next Meredith Andrew’s Success Story