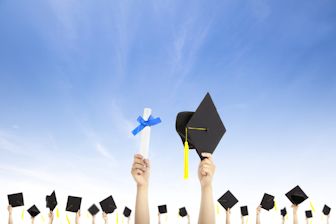 Jeremiah 29:11 For I know the plans I have for you,” declares the LORD, “plans to prosper you and not to harm you, plans to give you hope and a future.”

Griffin Furlong, from Jacksonville, Florida, will soon be starting his freshmen year at Florida State University. The path to college hasn’t come without a fight. This individual has had to battle the death of his mother, family financial struggles and homelessness, but through it all he has managed to maintain a positive outlook and succeed greatly in his studies.

Griffin’s story begins with the death of his mother to leukemia when he was just six years old. One can only imagine the trauma of losing their mother at such a young age. But things got worse. Unable to make ends meet, his family was forced to move into a homeless shelter. He lived there with his father and older brother for two years.

The family continued to struggle, but through it all Griffin continued to do his best in school. However, it was also clear that the death of his mother was very hard on him.

“At some points I was just.. I wanted to quit. It was horrible. A kid shouldn’t have to go through that”.

His family later moved to Jacksonville when he was in the sixth grade. But they continued to struggle financially. Often struggling to meet even basic needs, such as having enough food. As well as having to depend on help and support from other family members to get by.

Even through all this, Griffin continued to try to motivate himself and keep a positive attitude. Both for himself, and the memory of his mother. He was a member of the high school baseball team. Every new season he would write the phrase “Never give up” in the brim of his baseball cap to motivate himself. He was even highly praised by his teachers for his hard work and motivation. One teacher saying he was the most hard working and motivated student she ever had; Never missing school and always completing all his work on time.

Griffin recently found himself homeless once again. This time he was able to go live with his girlfriend’s mother for a few weeks, then moved in with an aunt and uncle.

Through it all he has managed to maintain an amazing 4.65 grade point average, and will be graduating as valedictorian of his class on June 4th. With a love for calculus, he plans to take up civil engineering at Florida State University.

Despite all his hard work, Griffin still faced hardships. He received some grants to help him with his college expenses, but that was not enough. To deal with this, He attempted to raise funds through a project on GoFundMe. Thanks to the generosity of strangers, Griffin has raised over $60,000, ensuring he will go to college debt free.

This story shows that God has a plan for all of us. A plan to prosper us, and help us succeed. We only need not give up hope, and continue to believe and have faith, and strive forward to the best of our abilities.

James V. is a guest author at The Bottom Line. He also enjoys doing work with programming and video narration. He has his own YouTube channel and does online streaming for the latest video games.
Previous Jungle Evangelism
Next Can You Claim A Happy Heart?